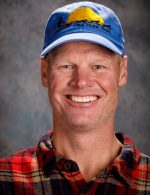 Brett Bruggeman, 50, was born in Cleveland and raised in Idaho. He graduated from BYU in 1992, Idaho State in 1993 and the University of Nebraska Med Center in 1999. He has been a dentist for the last 21 years. Brett explains, “My youngest son, Spencer, 17, has a birth defect which caused one leg to not develop muscle. He competed in traditional sports until he was 11 and then started looking for other sports in which he could be competitive in that didn’t require both legs. He was reading Jack London books and told my wife that he wanted a dog team for his sport. My wife, Suzette, was certain I had suggested that to him because I had been interested in mushing for a couple of months, but I had enough hobbies already to take on another one. Neither of us knew the other was interested in mushing. After Suzette was convinced this was the case, we decided this was meant to be. We started our kennel, Skinny Leg Sled Dogs, in honor of Spencer’s leg. His brothers always told him his skinny leg had no limits. We have been fortunate to have several great mushing mentors. Terry and Chris Adkins introduced us to the sport. Doug Swingley helped us in the beginning and was the source of our foundation bloodlines. Jessie Royer has been a close friend and taught us so much about mushing and dogs. In addition to Spencer, Brett and Suzette have two other adult sons, Brandon and Chase. Last Fall after I had signed up for the 2020 Iditarod I went into cardiac arrest while hunting and was later diagnosed with cardiac sarcoidosis. I had hoped to still run but the recovery had taken longer than I hoped. I thank those that have helped me through this. My friends Scott and Harrison who resuscitated me, cardiologist Al Gray for his foresight and surgical care. My dear mushing friends Doug Swingley, Nicole Lombardi, Jessie Royer and Willy Stewart for their encouragement and compassion. Lastly my dear wife and best friend Suzette for everything. I run this race for them, my dogs and for those who live with auto immune diseases.