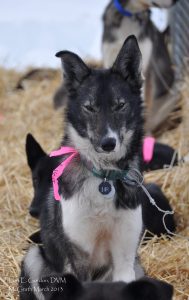 Let’s start with the basics.

Neutering is the removal of an animal’s reproductive organ(s), all or most of them. Neutering refers to both males and females, though typically used for males while spaying refers to the process in females. Traditionally in males the testes are removed (orchiectomy) so they cannot reproduce and their breeding behaviors are eliminated or reduced. In females the ovaries, fallopian tubes and uterus are removed (ovariohysterectomy via surgery or laparoscopically) so they will not go into ‘heat’ (breeding time), have breeding behavior, or reproduce. In Europe it is more common to remove just the ovaries, which results in the same effects.

Alternatives to traditional surgical sterilization methods are vasectomy in males and hysterectomy in females. These methods render the animal unable to reproduce, but their hormones are still produced active in the body so animals will still exhibit breeding behaviors.

What do the mushers think? Just ask them!

A very important aspect for a musher is managing their kennel dog population for the future. Having a great sled dog (or for that matter any superb athletic, sports, or working dog) is a product of both nature and nurture. Nature refers to the genetics inherent in the body – the natural physical and emotional drive (desire for the work) with which they are born. Nurture refers to everything that happens after that – nutrition, environment, role models, and training (positive reinforcement methods by far outshine negative methods for dependability and reliability!). When a musher realizes they have a star sled dog, breeding them is high on the list for the future of their kennel. Any decision to possibly neuter is therefore delayed at least until the dogs are given the chance to show their stuff.

Some mushers believe their dogs need their natural hormones to achieve their best size and shape. Hormones (mainly estrogen and testosterone) actually do influence a dog’s body and brain growth. They play a role in the development of muscle, ligaments, and bone, including when the growth plates in bones close, as well as several other systems. They are not the only hormones involved, as growth hormone and thyroid hormone, among others, are also involved, but estrogen and testosterone play a major role. So, while their education on what it is to be a sled dog continues, so also does a dog’s physical body continue to develop as well.

One thing neutering does not do is decrease drive. This is a myth that has been passed down from generation to generation, but has no credible support. Let’s discuss drive – a focused intense self-motivated desire to do something. For sled dogs it is the drive to race! High drive dogs take down bad guys, find people, save people, manage livestock, assist the disabled, and find bombs, among many, many other important jobs. Drive is actually present in puppies, recognizable by experienced handlers and trainers. It can be honed and directed with proper training and balance of play, work, and engagement to create the most amazing working dogs in the world.

The only behaviors that will be affected by neutering are those that are under the influence of hormones. A dog’s temperament, training, personality, and ability to do “work” are a result of genetics and upbringing, not its hormones. Neutering does not “calm” an excitable dog, and unless a dog is overfed or under-exercised, there is no reason for them to become fat and lazy.

Let’s not forget finances. It can become fairly pricey to spay and neuter multiple dogs. If remaining intact does not harm them, they are managed to prevent unwanted breeding, and there is not a medical reason to do so, then moneys can better be used for other more needed things.

How we manage intact males and females at the Iditarod

It is not uncommon for some of the female sled dogs to go into season (estrus, ‘heat’) during the race. They emit certain odors and exhibit behaviors that invite male dogs for breeding purposes. It can be very distracting to both sexes and may supersede the drive to run. A female in heat will be removed from the sled team and brought to the Return Dog area for care until the dogs are flown back to Anchorage. The actual numbers may change from year to year, but the teams are made up of more dogs than they are required to have at the finish of the race. Mushers expect to finish with fewer dogs than they start for several reasons, this being one of them, and are not disqualified unless they fall below a predetermined number of dogs on their team.

At the Return Dog station, we place the females in heat in a separate area from the others. They can be a source of frustration for the males and separation ensures they will always be far enough away to avoid any unintended breeding. They also get a pink ribbon tied to their collar for further identification. Females that arrive at Return Dog and are not in heat will be watched and checked for any change in status.

Sled dogs, sport dogs, and working dogs are often not spayed or neutered, or not until later in life. However, the practice of sterilizing animals has played a major role in managing world stray populations as well as treatment and prevention of several diseases (for example cancers and infections).

Every year, millions of unwanted dogs and cats, including puppies and kittens, are euthanized. The good news is that pet owners and shelters can make a difference by neutering to prevent the birth of unwanted puppies and kittens. The procedure has no effect on a pet’s intelligence or ability to learn, play, work or hunt. Some pets tend to be better behaved following surgical removal of their ovaries or testes, making them more desirable companions.

Disclaimer: The Content is not intended to be a substitute for professional veterinary medical advice, diagnosis, or treatment. Always seek the advice of your veterinarian with any questions you may have regarding a medical condition for your pet.