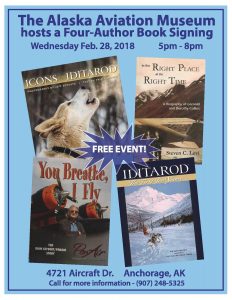 “This is an exceptional chance to meet and talk to real Alaskan authors and book publishers,” said Lael Morgan with Epicenter Press. On hand to sign and sell their books on February 28 from 5- 8 PM will be:

“This is Iditarod week, so we are hoping to get Iditarod mushing legends to be on hand to sign their photographs in the books as well as getting books signed by these authors,” said Raine Hall with the Old Iditarod Gang and a former Executive Director of the Iditarod Sled Dog Race.