The History of the Early Iditarod Air Force 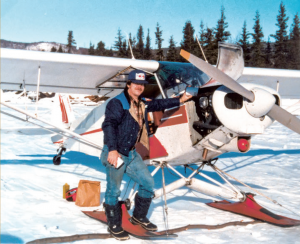 Excerpt from the book Iditarod: The First 10 Years, an anthology compiled by The Old Iditarod Gang.

While the dogs are the athletes of the Iditarod, aircraft and the people who pilot them are the workhorses of the 1,049-mile race. With no road access available past the Anchorage ceremonial start and restart areas of the race, supplies such as straw and dog-food drops need to be flown in to the checkpoints that span from Knik to Nome. Using just about any aircraft available, these planes haul thousands of pounds of race-related items into checkpoints and villages. Aircraft such as the Cessna 170, 180, 185, 206, and 207s along with Piper Super Cubs, Pacers, Cherokee Six, Maule, Stinson 108s, and Aeronica Sedan on skis and wheels have made up the fleet that eventually became the Iditarod Air Force. As Dick Mackey said, “Really anyone who had a plane and wanted to volunteer was welcome.”

“We couldn’t do it without pilots like Larry Thompson, who know the country and know their airplanes,” Joe Redington Sr. once said. “Those first few races were pretty tough to keep up with the mushers.” Using their own airplanes, fuel, and time, early volunteers staged and staggered their flights just barely ahead of the dog teams. Not unlike a scene in an Alaskan post office, even sleds, runners, and resupplies needed to be delivered before the racers arrived at the checkpoints. “There were some years when the weather was so bad that we couldn’t make it into the checkpoints before the race started,” recalled Thompson, one of the original race pilots. “And there were years when the mushers even threatened our lives if we didn’t get their food drops there before they arrived.”

Joe Sr., who was perhaps the first pilot to form what is now called the Iditarod Air Force, knew the trail and developed the race course by both flying the trail in his Piper PA-18 and by running dogs on it. He and veterinarian Terry Adkins were the first to fly the trail during the race, realizing that the trail was not the only obstacle for delivering much-needed supplies. Snowstorms and low clouds in the Alaska Range, chilly temperatures along the Southeast Fork of the Kuskokwim, and the continual bitter winds blowing down the Yukon were just the beginning of the challenges for pilots to conquer. But landing spots and snow conditions were also high on the list of things to watch for.

“Some of the checkpoints don’t even have an airport,” said Danny Davidson, “so we have to land on skis as close to the checkpoint as possible and hope we don’t hit overflow or frozen-in stumps or something. In the early days, it was all word-of-mouth weather reporting.”

Using their Alaskan aviation experience, these volunteer pilots started flying weeks before the race to get dog-food drops into the checkpoints all the way to Nome. Once they got to the coast, they were faced with bitter winds that whip up the snow into a cloud of frozen ice, obscuring the surface sometimes up to 500 feet.

“Everyone wants to say that Larry Thompson was the first Iditarod pilot,” says Dick Mackey. “Well, he wasn’t the first, but he was one of the first for sure.” Mackey knows that while many other pilots helped and followed the first Iditarod races, the fact remains that Joe Redington, the founder of the Iditarod Trail Sled Dog Race, was the first pilot to fly the Iditarod while on race business. Redington flew the trail in his Piper Cub to know and mark the way, he was the first to offer logistics and direction, and flew the trail with race veterinarian Terry Adkins. Redington even produced and printed images of him and his Piper aircraft on the trail as a “baseball-style” trading card for collectors.