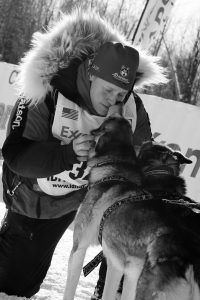 Iditarod Race Marshal Mark Nordman, based on information provided by a volunteer with medical training, notified the Alaska State Troopers and the Alaska Rescue Coordination Center for assistance. The Alaska RCC arrived at the checkpoint at 12:14 a.m. today and transported Zirkle safely to Providence Alaska Medical Center in Anchorage for further evaluation.

Zirkle is in stable but guarded condition after sustaining a significant impact that resulted in a concussion and orthopedic injuries to her upper torso. Zirkle has been released from the hospital and is resting in Anchorage with family and plans to return home when they are able.

Zirkle had 14 dogs in harness when she arrived in Rohn. Her race team is uninjured and being well cared for by volunteers at the Rohn checkpoint where they will wait for the first flight out to be flown to Anchorage and driven back home.

The Iditarod would like to thank the race personnel at the Rohn checkpoint for their care of Zirkle, the Alaska State Troopers and the Alaska Rescue Coordination Center for their response efforts.