Where did the Official Iditarod Finisher’s License Plate Originate? 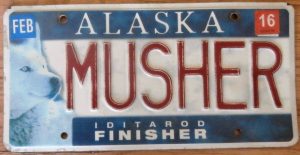 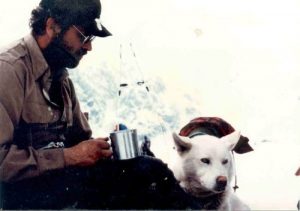 Although it applies to thousands of Iditarod mushers, only the designer of this Official Iditarod Finisher’s license plate can lay claim to it.  Fred Agree, of Homer, Alaska made his way to the volunteer picnic this year, and I was fortunate enough to make a connection with him to get this story that some may not know.

On March 27, 2009, the Alaska state legislature approved the Official Iditarod Finisher’s license plate, created by veteran Iditarod musher and long -time member of the Automobile License Plate Collectors Association, Fred Agree.  Using his graphic design background, this was just one of several things Fred designed and worked on for the Iditarod Trail Committee, including trail markers seen in the museum at headquarters and Iditarod musher grave markers.

Any Iditarod Finisher living in Alaska is eligible to apply for this Alaska license plate.  It can be issued in one of 2 ways.  One is the letters “IDT” followed by the musher’s finisher number, for example “IDT203”.  The other is a vanity style plate of 6 letters, such as Fred’s “MUSHER”. For the application, the finisher will need $50 and a statement from the ITC giving their official finish number.  More information can be found here:  Alaska DMV.

The dog featured on the official finisher plate is Fred’s lead dog, Blackie.  Ok, I know you are probably wondering about the obvious, as I was. Why is a predominantly white dog named Blackie?  “Because I didn’t want to name him Whitie,” was Fred’s reply.

Fred ran the Iditarod in 1984 and 1985, finishing both times.  He says he quit because he was “beat by” Susan Butcher, Libby Riddles and DeeDee Jonrowe. “I was “Butchered and Riddled” on the trail,” Fred jokes.  He holds the unique distinctions of being the first Philadelphian and the first Jewish musher to finish the Iditarod as well as being one of the last 2 folks to collect data for the 1980 U.S. Census by dog team!

Fred has a long, fascinating history with dog sledding and expeditions; I hope someday you get the chance to talk to him as I did.