“We owe it to each other to tell stories.” – Neil Gaiman

The early history of Iditarod has been preserved and made available to all thanks to a mammoth project taken on by The Old Iditarod Gang. Friends gathered and stories flowed freely between them, one story lead to another and the idea was born. We should write a book with all the great stories, pictures and art from the early years of Iditarod. Now it’s easy to say, “Lets write a book” but actually writing a book is a very different thing. In the case of Iditarod®: The First Ten Years, energy grew and encompassed the project. Now, five years after the words “we should write a book” were spoken, there is a book and it came off the press in January of 2015. 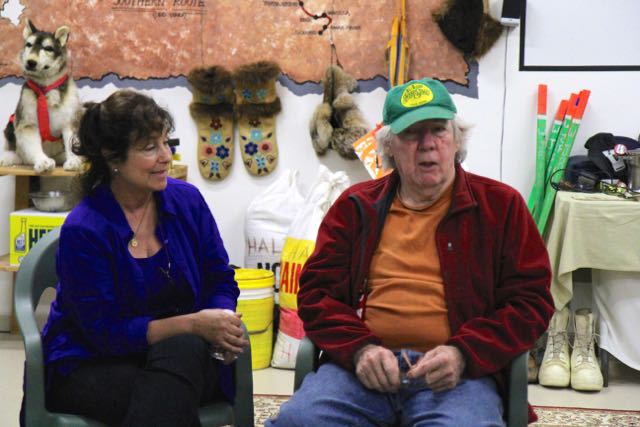 The book release party for Iditarod®: the First Ten Years is scheduled for Friday, March 6th from 5:00 to 8:00 PM in the Redington Room at the Millennium Alaskan Hotel. Members of the Old Iditarod Gang and many other contributors will be on hand to autograph books. A portion of the proceeds will be donated to the Iditarod Tail Foundation designated specifically for veterinarian care of the sled dogs.

Included in the treasury from the first ten years are stories about the early champions. Some of the early victors met with project writers, Frank Gerjevic and Tim Jones, to tell stories and share memories from the trail. Friends, peers and family members shared stories with Frank and Tim on behalf of those not able to meet with the writers. Gerjevic and Jones listened intently then went to work writing, capturing not only the character of the person but also the lore, the time, the trail, the villages, the volunteers and the amazing canine athletes.

More than one hundred contributors have united to share the history of the early Iditarod through stories, newspaper articles, photos and art. Mushers, volunteers and writers have shared their experiences. The Anchorage Daily News (now Alaska Dispatch) and other newspapers opened their photo archives, artists have donated their early race inspired works and individuals with a knack for saving clippings, letters and photographs have contributed immeasurably. Long time Iditarod staffers, Joanne Potts and Greg Bill readily shared their knowledge and information from the earliest days of the race.

Gail Phillips, one of the Old Iditarod Gang who worked tirelessly in compiling the anthology says, “If you know the history and background of something you are attempting to be successful at, your chance of success is much greater.  We believe we have created a valid historic record of the Iditarod Race. Unless one knows what has happened in the past, it is hard to know how to make things better in the future and I think our book provides this incredible insight.”

“It’s has been said that next to hunger and thirst, our most basic human need is for storytelling.” – Khalil Gibran

It may be as hard to imagine what it was like mushing a distance of 1,000 miles in the early 1970’s as to imagine what it was like delivering the serum to Nome in 1925. At the start of the Inaugural Iditarod, wives and sweethearts had tears in their eyes wondering if the men they sent off would ever be seen again. But these were hardy men capable of surviving the harshness of Alaska with even hardier dogs. Their sleds were heavy, the food was substantial, the clothing was traditional and it was an adventure that couldn’t be passed up. In its own way, it was a call to the wild for men and dogs.

What can today’s public, organizers and mushers take from the book? One of the Old Iditarod Gang, Al Crane from Nome, who contributed to the beginnings of the race as a pilot, race coordinator, administrator, 4-year board president and musher, responded to that question. “Perhaps they will remember that it has never been ‘just a race.’ It’s a celebration of Alaska’s unique history and a tale of the bond and teamwork between men and women on the trail and their dogs and that in the end, just to make the trip (money or not) is worth it!  The Iditarod of today as compared to those first few years is like night and day. It’s true, the elements and the distance itself are the same, but the science on “how to do it” has evolved so much that someone stepping out of the 1973 marathon into the speed of the 2015 extravaganza, would be totally baffled. It is my hope that our book written by those who lived it, would not only set the record straight, but that it would impart to the readers just what it took to launch Iditarod onto the global stage of today’s mainstream sporting events. Our book not only pays tribute to the legions of volunteers but to every hardy soul who faced the challenge to make their quest a reality.”  Crane ran Iditarod in 1977 placing 15th or of 36 finishers and received $640.  Compare that with Matt Failors cash award of $20,000 for 15th place the 2014 race.

“Stories have to be told or they die, and when they die, we can’t remember who we are or why we’re here.” – Sue Monk Kid

Who are the people instrumental in the production of this incredible chronicle of history? Raine Hall Rawlins and Gail Phillips have offered insight, “As the Iditarod Trail Sled Dog Race was getting off the ground, many in this group of friends worked side-by-side celebrating Alaska’s history and helping to make the race happen.  Members of the Old Iditarod Gang, LLC include Al and Jo Crane, Frank Flavin, Frank Gerjevic, Alan and Raine (Hall) Rawlins, Walt and Gail Phillips, Rob Stapleton, Jon and Jona Van Zyle and Anne Patch Winters. Their camaraderie has carried them through more than forty years of the race, giving their time, talents and funds to serve as race officials, volunteers, administrators, fundraisers, photographers, artists, pilots, promoters and more. Some of them ran and finished the race.”

Rawlins and Phillips further explain, “To remember these early days, the Gang put out a call for first person stories and images from those involved in the first decade. Joining the team were writers Joe May, Tim Jones, Slim Randles, Pam Randles, Shelley Gill, and Rod Perry. Photographers Henry Peck, Richard Burmeister, Fran Durner and official Iditarod Race photographer Jeff Schultz signed on and helped us access historical photos from the collections of Bill Devine, Jim Brown and many more. With their contributions and dozens more from others who were there, what they created was a book of memories…and a book of thanks.”

Iditarod®: The First Ten Years contains the stories and the details told by those who were there. It’s an amazing chronicle of what it was like back then and thankfully The Old Iditarod Gang put the sled in motion and saw the project through to Nome.  The anthology is a must read for mushers, race followers, mushing enthusiasts, Iditarod educators, fans of the last frontier, reality show junkies, Alaska historians and diehard seekers of adventure. The collection of stories, art and photographs transports the reader back in time to stand with the people and dogs in the places that formed the foundation of Iditarod as we know it today.

“There is no greater agony than bearing an untold story inside you.” – May Angelou