Eye on the Jr:  One Champion, All Winners 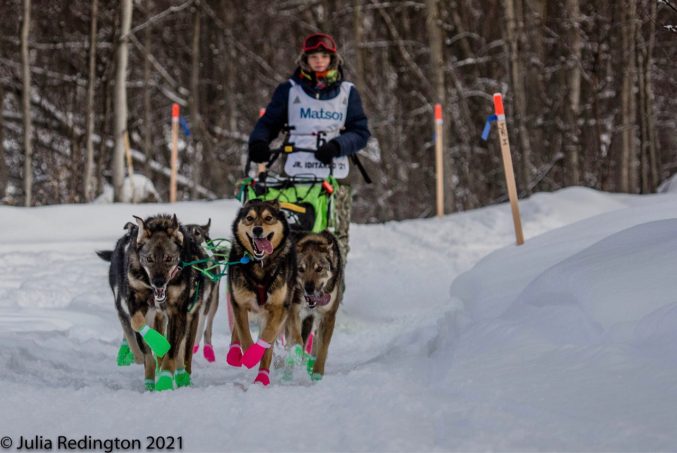 From the time the Jr. Iditarod mushers departed Yentna Station this morning well before sunrise, the lead never changed.  It looked at times like second place Kristal Hanson might over take Morgan Martens and his Ryan Redington speedsters or that third place Anna Coke might over take Kristal or both Kristal and Morgan but Morgan Martens held the lead to claim not only rookie of the year honors but also the 2021 Jr. Iditarod Championship.

Martens, from Brule, Wisconsin ran a team of Ryan Redington dogs with trusted leader Henry.  Morgan very much appreciates working with an Iditarod veteran and Beargrease champion.  He says Ryan is generous, kind, teaches by example and his dogs are incredible.

The newly fallen snow from Saturday and the 15 to 25 MPH winds of today combined for some challenging trail conditions.  Even though trailbreakers left Yentna Station before the mushers, the trail drifted shut behind the snow machines.  We saw evidence on the GPS tracker.  Teams would be moving along at 8 or 9 miles an hour and then suddenly slow down to a crawl.  Yes, the mushers were leading their dogs through sizable drifts.  Then the pace picked back up.

As the day progressed, the cloudy sky became partly cloudy and by the time Morgan, Kristal and Anna made the finish line at Happy Trails Kennels, there was mostly blue sky and bright sunshine.  In the sled dog world, it was indeed a bluebird sort of day with a perfect temperature in the high teens.  Every team that came to the finish stood barking with tails wagging as race marshal, Micah Dagerland, did the mandatory equipment check.  Sincere thanks goes to Barb Redington and Julia Redington for providing photos of the Jr. mushers.  Their pictures are truly worth 1,000 words! 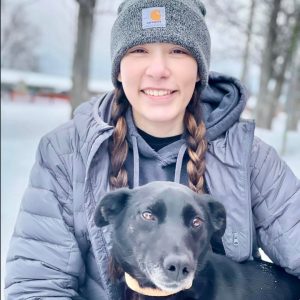 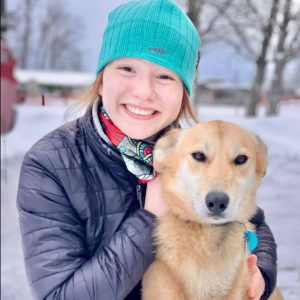 Kristal Hanson claimed second place in her second Jr. Iditarod.  Between Kristal, her father Bryan (a past Jr. Iditarod Champion) and two aunts, they have completed 13 Jr. Iditarod races.  Kristal’s grandfather and great uncle have served as pilots for the Iditarod Air Force.  Kristal works with Jason and Melissa (Owens) Stewart and ran a team of their Owl Creek Kennel dogs with leaders Airman and Zeno.

Anna Coke has completed her third Jr. Iditarod claiming third place.  Coke has worked with Jr. Champion and Iditarod veteran Jessica Klejka and ran a team from Tail Wind Kennel with Radar and Ralph in lead.  Coke was Jr. Iditarod rookie of the year in 2019 with a second place finish and placed third in 2020.  At the age of 17, Anna is graduating from the Jr. Iditarod after an excellent career. 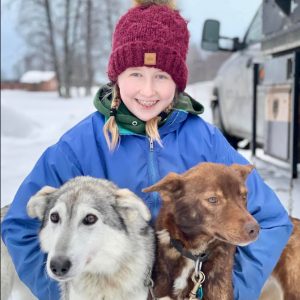 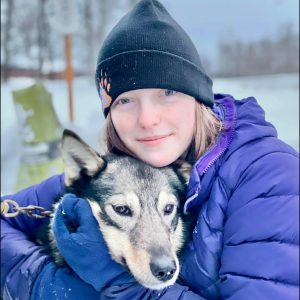 Claiming 4th place was rookie Hannah Wappett.  Hannah has raised several litters of her own puppies and some of those dogs were on her Jr. Iditarod team.  Hannah has been mushing since the age of 5.  She’s a sprint racer and has completed the Willow Jr. 100 three times.  Besides enjoying cross-country running and skiing, she likes skijoring with her dogs.

Veteran Cassidy Meyer of Fairbanks claimed 5th place.  Her family maintains a kennel and uses dogs for transportation between cabins and hunting places during the winter.  Meyer is a competitive rock climber, a musher and aspiring writer.  Meyer’s lead dog received the Blue Harness award.  At the age of 17, Cassidy has now graduated from the Jr. Iditarod.  Best wishes! 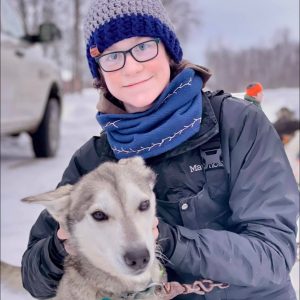 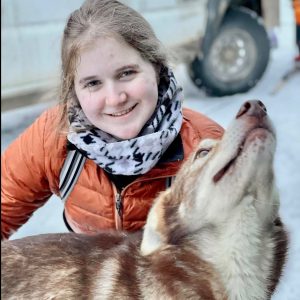 Rookie Jace Cogdill from Willow earned 6th place.  Jace has worked with Iditarod veteran Linwood Fiedler and was running a team of Wayfinder Kennel dogs for the race.  Before the race Jace said that he didn’t know the trail but from working at Wayfinder and being coached by Linwood, he knew what he was doing.  Meyer and Cogdill shared the finish line as they completed the race just three minutes apart.

Fourth generation musher, rookie Ellen Redington made the finish line in 7th place.  Team Redington along with the Flodin side of the family was there in full force to great the newest member of the clan to conquer the Jr. Iditarod.  It’s a fun fact that her father Ray and her mother Julia Flodin met at the 1991 Jr. Iditarod.  Ellen’s Jr. Iditarod family tree includes her parents, her grandmother Barb Redington and several uncles on both sides of the family. 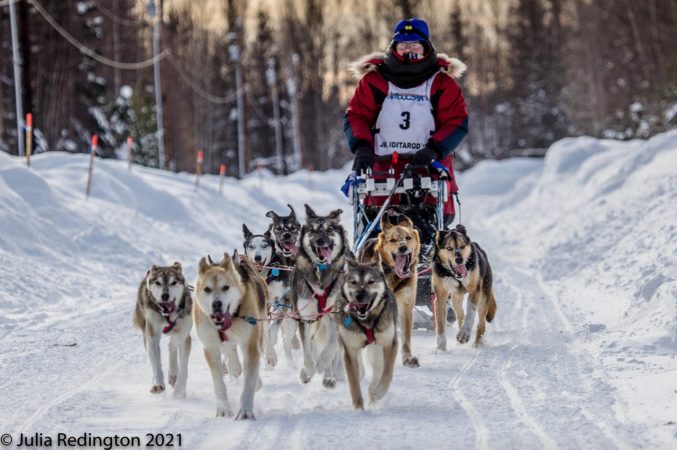 James Shawcroft was one of four mushers to make the finish during the 1700 hour.  Shawcroft arrived in 8th place.  Wearing red, Shawcroft was easy to spot far down the trail as he made his way across Gretzky Pond to the finish line.  James raced dogs from the family team.  Shawcroft received the Sportsmanship award from his fellow mushers.  Seems he likes to chat and tell stories so he’s the guy who keeps everyone’s spirits up.  Today on the trail, he put his snowshoes on and helped other teams get through the drifted sections of trail. 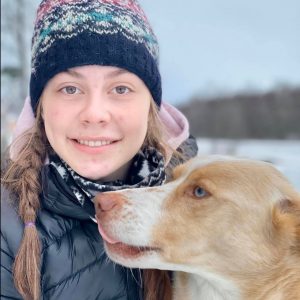 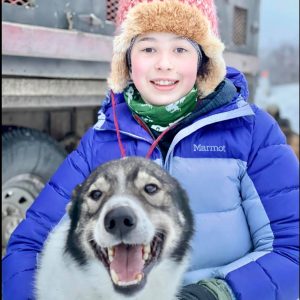 Claiming 9th place was Jessica Dixon from Fairbanks.  Dixon race team included dogs that she has raised and trained since birth. Jessica hopes to become a veterinarian and plans to continue mushing.  With her rookie run at the age of 17, Jessica has also com0leted her Jr. Iditarod career.  Best Wishes!

In 10th place, receiving the Red Lantern Award is Ava Moore Smyth.  As an 8th grader, Ava enjoys extracurricular sports and student government.  Ava has grown up around sled dogs and has a long family history in Iditarod including both parents and grand parents.  Ava has driven her father’s tag sled for the Iditarod Ceremonial Start in Anchorage.

The Jr. Iditarod provides $20,000 in scholarship funds that are awarded to the top five finishers, the Sportsmanship award winner and the Humanitarian award winner.  The monies can be used by the recipients for any form of higher education or advanced training.  The Jr. Iditarod also presents a Jason and Melissa Steward sled and sled bag combination to the Champion.  Valley area merchants are very generous in donating goods for musher packs and prizes.

Even with the wind and drifting snow, all teams completed the race prior to sunset.  Race officials and veterinarians praised the youth for their mushing, camping and dog care skills.  Dogs stood at the finish line clearly wondering why they had to stop – running was so much fun.  There is one champion but all of the Jr. Iditarod mushers are winners.  They are all responsible individuals who accept and embrace challenge.  Congratulations to all mushers!