Eye on the Trail: Aliy Fans at UNK 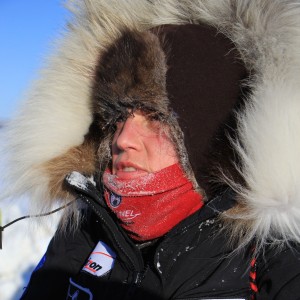 The Queen of Hearts, Aliy Zirkle, followed Aaron Burmeister into Unalakleet by 2 hours and 17 minutes.  Zirkle and Burmeister have their teams bedded down on the leeward side of the snow berms created on the slough in front of the checkpoint.  The berms are created for wind protection an for today, it’s a pretty good idea.  The wind is blowing steady at just over thirty miles and hour with gust up to 40 something.  It’s fine when walking with the wind at your back but you really have to lean into it to make forward progress.  Word has it the wind on the portage between Kaltag and Unalakleet created a challenging 85 miles.

There’s a lot of strategy going on with these front runners.  Just because Burmeister made the coast first or just because Dallas Seavey blew through and is on his way to Shaktoolik, it doesn’t mean the race has been decided.  What’s really important at this point in time is to accurately assess what your dogs are capable of doing from here to Nome.  There’s roughly 260 miles left of the 2015 Iditarod.  Strategies are important.

There were as many fans waiting to greet Aliy as there were to greet Aaron.  When she arrived, her first priority was to distribute straw for the dogs to root around in and create their bed for their rest here in Unalakleet.  Aliy removed boots and then created a warm soup with lots of kibble and other tasty protein.  Most of her dogs were eating from their bowls before she had even set it down.  Her team looked very spritely coming and and ate just as enthusiastically.  Aliy got out the wrist wraps and paw cream and spent time massaging wrists and feet. 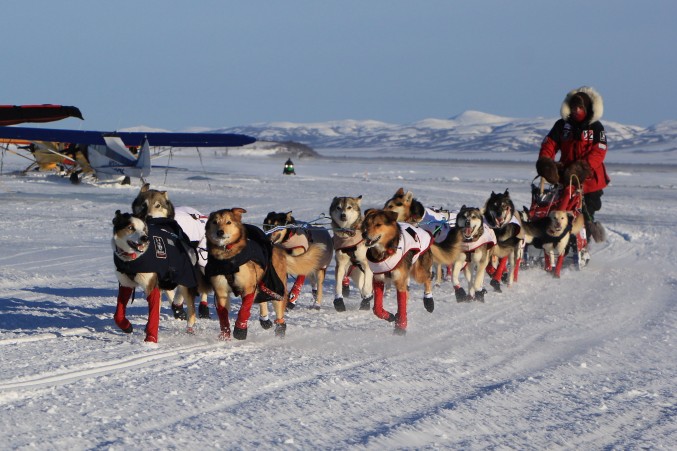 Aliy is 45 years old.  She holds a degree in Biology and Anthropology from the University of Pennsylvania.  When Aliy first came to Alaska, she worked for the US Fish and Wildlife Service.  It wasn’t long before she became involved with sled dogs.  She’s finished the Iditarod 14 times and says, “Iditarod is my passion, my job, and my life.”  Alaskan huskies are the focus of my life.    Aliy says about the dogs at SP Kennel, “We have some of the most talented, fun-loving, dedicated sled dogs in the world so racing them on the largest stage in the world, the Iditarod, seems only fitting.”  Wondering what the “SP” of SP Kennel stand’s for?  One of Aliy’s first and most incredible dogs was named Skunk.  When it came time to name the kennel, she decided to honor Skunk and call the kennel Skunk’s Place which was shortened to “SP.” 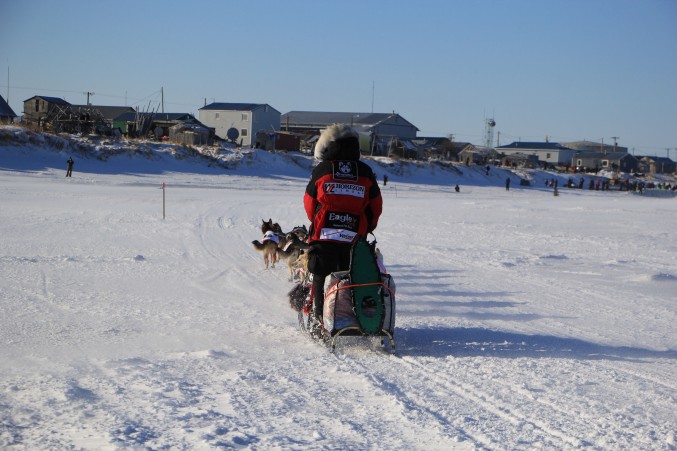 While Aliy was tending to her team, a little girl approached her and said, “Hi, I’m an Aliy fan.  Would you like a starburst?  With a huge smile, Aliy replied, “Sure why don’t you just pop it in my mouth.”  That little Aliy fan will go to bed tonight dreaming of giving her hero a Starburst.”