Eye on the Trail: Nome Banquet and Awards 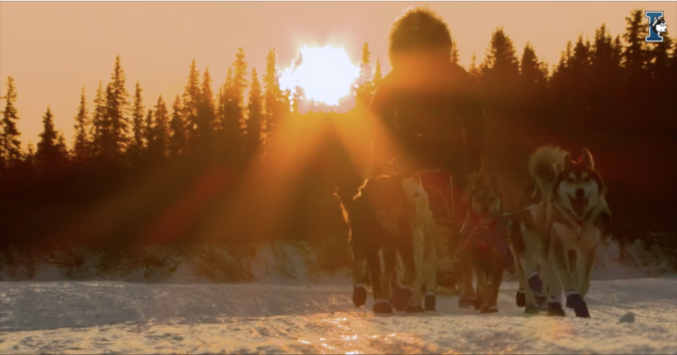 Aaron Burmeister Runs Near Unalalkleet at Sunset (Photo by Insider)

The return to the traditional Finisher’s Banquet format in Nome was welcomed by mushers, families, sponsors and Iditarod fans alike.  After two years of anything but normal, it felt very good to gather two weeks after the Willow start to celebrate the 50th running of Iditarod at the Recreation Center in Nome.  Awards were presented for which mushers expressed their gratitude to sponsors for supporting the race.  The meal prepared and served buffet style by the Lakefront of Anchorage was the traditional fare of salads, pasta, vegetables, shrimp and roast prime rib complimented  by a huge array of desserts and the always impressive chocolate dipped strawberry filled sleds.  It is a feast fit for mushers who have just crossed the great state of Alaska absorbing the incredible beauty and enduring countless challenges of less than ideal trail conditions and fickle weather.  Mushers were called to the stage in finish order to draw a key and try starting the NAC 4-wheeler then had the opportunity to share stories about their trail experience and extend heartfelt thanks to encouragers, supporters, handlers, family and everyone that helped them get the to the trail.

Leonhard Seppala was honored as the number one musher through 1979. In 1980, the Iditarod Committee decided to have “Wild Bill” Shannon share the honor. Since then, the directors have chosen a person or persons, not necessarily mushers, who have made a significant contribution to the sport of sled dog racing. The Honorary Musher is listed as the first one out of the starting line.

First presented in 2019 and was given to the first musher to reach the McGrath checkpoint. The 2022 award recipient will receive a pair of musher mittens made of beaver fur and moose hide handmade by Loretta Maillelle of McGrath as well as a musher hat made from beaver fur and beaded velvet made by Lucy Miller of McGrath.  Alaska Air Transit will also be providing hand-made awards in Nikolai.

While there was obviously a “first musher to the halfway point” in every race, there are no records of who that person was prior to 1980 when the first Halfway Award was presented. GCI became the sponsor of this award in 1994. The winning musher receives the award on the spot and then it is symbolically presented in Nome. This award, given in honor of the late “Mother of the Iditarod,” is presented in Iditarod, when following the Southern route in the odd years, and Cripple, when following the Northern route in even years. The first musher to the halfway point on the Iditarod Trail will receive a trophy and his/her choice of $3,000 in gold nuggets symbolic of the history of this interior area of the Iditarod Mining District or brand-new smartphone with a year of free service. A beautiful perpetual trophy made of Alaskan birch and marble and featuring a photograph of the late Dorothy G. Page remains year-round at Iditarod headquarters.

The Lakefront Anchorage First Musher to the Yukon Award

Presented since 1983, the award will be given to the first musher to Ruby. The winning musher receives a five-course, gourmet dinner prepared by The Lakefront Anchorage’s executive chef, $3,500 in one-dollar bills, and a bottle of Dom Perignon.

This award has been presented by Bristol Bay Native Corporation since 2014 to the first musher to reach the Kaltag checkpoint. The musher will receive a check for $2,000 and 25 pounds of Bristol Bay salmon.

This was first presented in 1987. Ryan Air began sponsoring this award in 2019 and for this year it will be given to the first musher to reach the Unalakleet checkpoint. The winning musher receives $1,000 in gold nuggets and a collection of Ryan Air Gear.

This award was first given out in 2018. Northrim Bank presented the award to the first musher to reach the White Mountain checkpoint. Winner receives a check for $2,500 and a one-of-a-kind print.

One of the longest-standing awards to an Iditarod musher is presented by the Nome Kennel Club. The club awards $500 to the musher who finishes in the top 20 and has the fastest time from Safety to Nome.

Rookie of the Year Award

There has obviously been a top finishing rookie in every Iditarod. In fact, rookies won the first three races. It wasn’t until 1976 that the top-finishing rookie was not the winner. For purposes of this award, a rookie is defined as a musher racing his/her first Iditarod. The top-placing rookie receives a beautiful trophy, along with a check for $2,000.

The Red Lantern Award acts as a symbol of perseverance for the Iditarod. According to historians, awarding the red lantern for the last place finisher has become an Alaska tradition in sled dog racing. The award of $1000, presented by Lynden, is given to the final team to cross the finish line in recognition of their perseverance and commitment to completing the job despite unexpected challenges.

The concept for an award for the most improved musher began in 1987, when the mushers honored Ted English. English had finished 18th in his second race and eight the following year. The winner receives $2,000 in cash and a commemorative trophy.

A sportsmanship award was initiated in 1977 by the Alaska Native Brotherhood to honor Native musher Ken Chase. The ANB continued to present the Ken Chase Sportsmanship Award through 1982. Since then, the award has been presented by the Iditarod Trail Committee, and various other sponsors, to the person chosen by his/her peers as the best sportsman on the trail. In 2015, Donlin Gold began sponsoring the award. The winner will receive a $3,000 check and a plaque.

*Travis Beals – Seward, Alaska – For the support he gave all mushers and the sled he lent to Chad Stoddard*

Presented since 2010 to the most inspirational musher, the recipient of the Most Inspirational Musher Award is chosen by fellow mushers. Winner receives a paid entry fee for the following year’s Iditarod.

*Matthew Failor – Willow, Alaska – His support of other mushers in the face of a moose threatening the teams.  Matthew Dispatched the moose and field dressed it for the residents of Galena*

This award began in 2007 and is awarded to the individual chosen by the checkers in the checkpoints who best epitomizes Herbie Nayokpuk’s spirit of mushing the Iditarod. The winner receives $1,049 in pocket change and a Northern Air Cargo jacket.

The annual Golden Clipboard Award is presented by the Iditarod official finishers to the checkpoint the mushers feel is the most helpful along the trail.

Presented since 1982 to a musher that demonstrates outstanding dog care while remaining competitive throughout the race, the recipient of the Leonhard Seppala Humanitarian Award is chosen by the veterinary team. Recipient receives an engraved lead crystal trophy and a paid entry fee for the next year’s race.

*Dan Kaduce – Chatanika, Alaska – Dogs are evaluated by a team of veterinarians on hydration, attitude, weight and gait.  Kaduce finished with a full line of 14 dogs*

Lolly Medley, Wasilla harness maker and one of only two women to run the second Iditarod in 1974, began presenting a golden harness to an outstanding lead dog chosen by the mushers, in 1977. Lolly Medley died in August 1996. The award continues in her honor now presented by the City of Nome.

This award was started in 2008 by Northern Air Cargo, who wanted to present something every musher would have a chance to win.  A key is drawn by each musher who then tries to start the 4-wheeler with their key. There is only one right key and the one who starts the 4-wheeler wins.