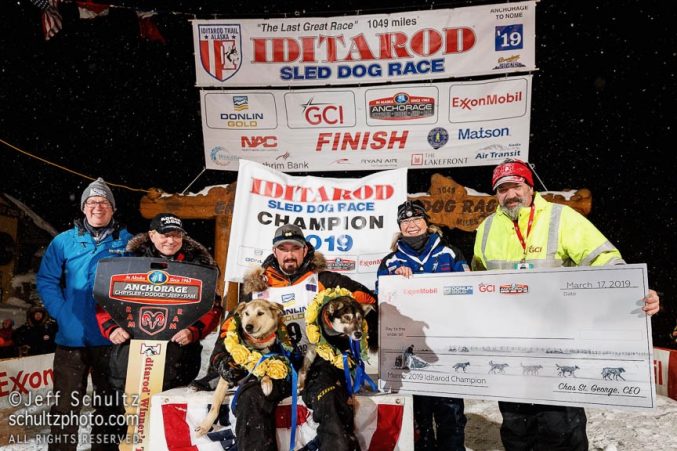 Kaiser is the first musher of Yup’ik descent to win an Iditarod championship. His roots in Bethel, located in the Yukon-Kuskokwim Delta region in Southwest Alaska, span three generations, starting with his great-grandparents.

Kaiser is a veteran of nine consecutive Iditarod runs beginning in 2010.  He finished his rookie run and earned his finishers belt buckle in 28th place.  In his second run Peter improved to 8th place then followed in 2012 with 5th place.  Kaiser slipped out of the top ten in 2013, 14 and 15 placing 13th and 14th .  In 2016 Kaiser and company claimed 5th with a time of 8 days, 20 hours and 24 minutes. In 2017 with a Fairbanks start, Kaiser Racing secured 9th place.  Peter returned to his familiar 5th place in 2018.  He is also a four-time, consecutive Kuskokwim 300 champion. 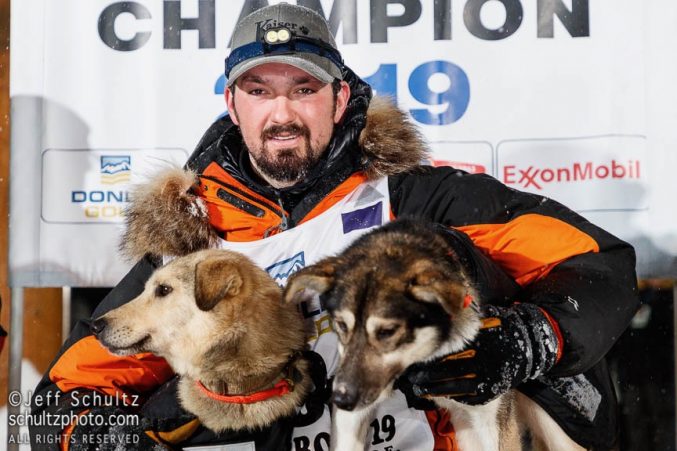 Pete Kaiser poses with his leaders Marrow (L) and Lucy at the Nome finish line after winning the 2019 Iditarod Trail Sled Dog Race.

Peter, who’s 31, was born and raised in Bethel, Alaska.  He graduated from Bethel High School in 2005 and has worked for Knik Construction/Lynden for the last eleven years.  Kaiser enjoys boats, hunting, and fishing.  He and his wife Bethany have two daughters.

Kaiser says, “Our family has always had dogs.  I’ve been mushing since I was a kid.  Watching the Kuskokwim 300 every January sparked my interest in long distance racing, and a few years ago, I decided that I would give the Iditarod a try.”

Front Street in Nome was lined with fans from all over Alaska and the world to watch as Kaiser drove his race team to the finish line.

Mushers currently on the Iditarod trail will continue to make their way to Nome to cheering fans, friends and family. The race finishes when the last musher crosses under the arch, claiming the “red lantern,” a long-standing Iditarod tradition and symbol of perseverance.

The Iditarod awards banquet will be held in Nome on Sunday, March 17, at 4 p.m. at the Nome Recreation Center. Here, Kaiser will again be recognized as champion and awarded his prize money as well as a new 2019 Ram truck.