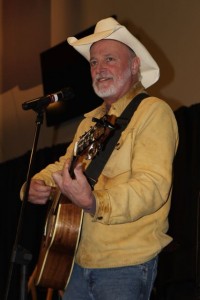 There’s a lot going on at the Thursday evening Musher Banquet held at the Dena’ina Center in downtown Anchorage. The real center of attention though is a mukluk, the mukluk that holds the chips drawn by mushers bearing their starting position.

Alaska’s Hobo Jim opened the festivities strumming and singing. Hobo, Alaska’s State Balladeer, is an Alaskan legend that’s lived the Alaska life as a commercial fisherman, logger and cowboy. Those experiences have served as a basis for the songs and lyrics he’s written. Hobo has written the Iditarod Trail Song that is a favorite of race fans worldwide. At the banquet some folks knew the song well enough to join in on the verses but everybody knew and joined in on the chorus.

DeeDee Jonrowe who is running her thirty-third Iditarod offered up a prayer before the meal asking for safe passage on the trail for dogs, mushers and volunteers, bringing everyone safely to Nome. As would be expected at a sporting event, the National Anthem was sung then as is a tradition in Alaska, the Alaska Flag Song followed.

Each year the Iditarod Trail Committee selects an individual as the “Honorary Musher” of the race. Philip Esai of Nikolai has been selected for 2015. Philip, an Iditarod volunteer since the very first race passed away in May of 2014. Wearing Bib #1, Philip’s wife, Dora, will ride in Kevin Harper’s Sled. It’s tradition that the reigning Junior Iditarod Champion leads all mushers down the trail at the Ceremonial Start.

Philip and Dora have been volunteers since the very beginning of the race. In the early years, the Athabascan couple opened their cabin on the Kuskokwim River to the mushers. There was always plenty of moose stew, moose steak and beaver to eat. From the 2015 Race Guide, “Philip and family members helped in a variety of ways for each Iditarod race. Often he could be found working the checkpoint from when the first musher arrived until the last musher left. Staying up for 24 hours at a time was just what Philip did because he knew it was the right thing to do. Esai was a dog musher from childhood and felt a special connection to the dogs, the mushers and the Iditarod.”   In recent years the Esai family erected a canvas wall tent at the checkpoint complete with a wood burning stove and spruce bough floor for the mushers to sleep comfortably in. 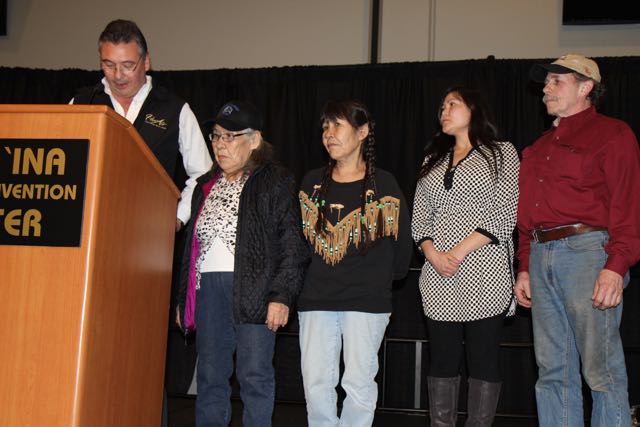 Philip was always ready and willing when trail work needed to be done. Esai was a man who believed that if you give back to the land, it will give back to you. He spent time with the young people in the village teaching them about hunting, fishing and subsistence life, Although Philip will not be present physically when future races pass through Nikolai, his love for the race will surround the checkpoint into eternity.

Donlin Gold Principal Partner Sponsor of Iditarod 2015 provided a Skidoo Snowmachine to be given away to one of the mushers. Sometimes mushers draw a key and try it. If the machine starts, it’s yours. The suspense was shortened by simply drawing a musher’s name. Nathan Schroeder, 2014 Iditarod Rookie of the Year, back for his second run to Nome won the powerful machine. I’m sure he’ll figure out a way to get it back home to Chisholm, Minnesota.

Ben Harper of Wasilla was the first musher to reach into the mukluk and draw his starting position. He drew number 37. Aaron Burmeister of Nome was the final musher to reach into the mukluk for the one remaining starting number. It was 63. Drawing number 2, rookie Rob Cooke will lead all mushers out of Fairbanks. Veteran Zoya DeNure will be the final musher wearing bib 79. 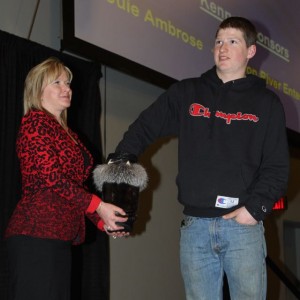 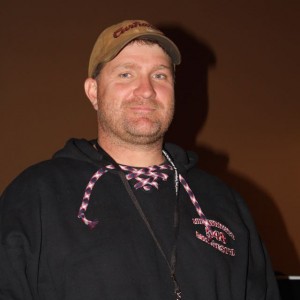 Forecast for the ceremonial start comes in the form of a Winter Weather Advisory. The advisory reads, “Heavy snow to impact south-central Alaska tonight and Saturday. Snow will develop this evening and become heavy overnight and taper off Saturday morning. Snow will accumulate 4 to 9 inches.” Will this make the job of the Anchorage street crews more or less complicated? My sense is that new snow will be the proverbial icing on the cake or welcome top-dressing for the snow the street crews have been able to scrap up to cover the streets of Anchorage.