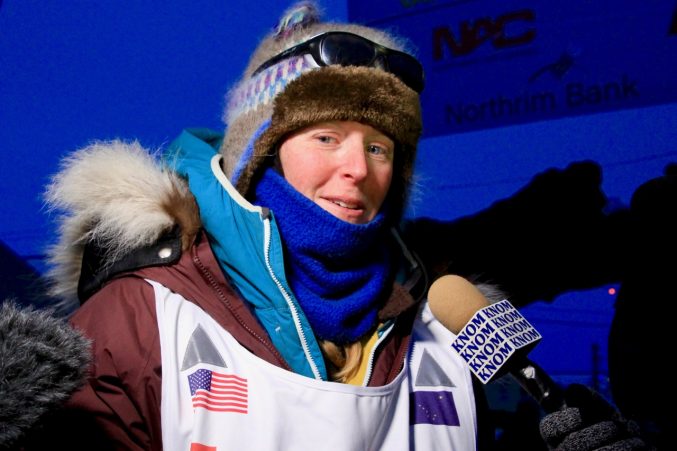 Paige Drobny and Cody Strathe own/operate quid Acres Kennel located near Fairbanks.  With Paige studying squid in her Master’s Degree program, the kennel received its name.  Paige is completing her 5th Iditarod in 5 starts.  Her best finish is 25th place.  Her seventh place finish in Iditarod XLVII, marks her first time in the top ten and is an improvement of eighteen places.

Paige says she enjoys the outdoor lifestyle.  She works as a fisheries biologist and helps her husband, Cody, build sleds for their company, DogPaddle Designs.  Initially mushing was a way for them to explore the wilds of Alaska.  After several years of camping and exploring, they decided to give racing a try.  In 2010, Drobny and Strathe entered the GinGin 200.  They were hooked on racing and eventually found themselves running the Distance Doubles – Yukon Quest and Iditarod.  Drobny was one of the four Iditarod mushers who also completed the Quest in early February.  Strathe ran the quest also in 2019.  All the dogs on Paige’s Iditarod team were quest finishers.

Paige and Cody have the distinction of being the only husband and wife team to run both the Iditarod and Yukon Quest in the same year, 2016.  Paige has finished as high as 4th place in the Yukon Quest. She finished in 6th place in 2019.

With Paige’s arrived in Nome this evening as the sixth place finisher, we have 3 women finishing in the top seven places.  This is the first time in the history of the race that 3 women have finished in the top ten mushers let alone the top seven places.  Jessie Royer, Aliy Zirkle and Paige Drobny are role models of the highest quality. Their impact on the sport of mushing and the Iditarod itself has been monumental.