Eye on the Trail: Recognizing and Thanking Diane Johnson 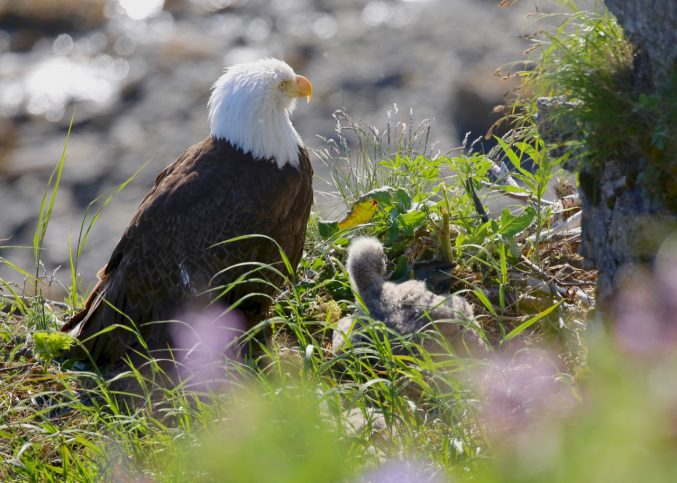 When Diane Johnson became director of Iditarod Education in the fall of 2005, the program was in its infancy.  Today as Diane passes the roll onto a new director, the program is well-developed and serving educators and students around the world.  It reminds me of a photo I captured a year ago in Katmai.  A mature adult eagle is perched on the edge of its nest looking at the fuzzy little eaglets in the nest.  Those little chicks are like the program when Diane became director of EDU.  The mature eagle represents the program today. 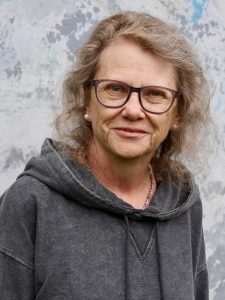 Realizing that Iditarod was a powerful tool for inspiring students, many of her lessons became Iditarod themed.  She didn’t “teach” Iditarod.  Instead, she used it as a theme for education across the school district’s curriculum.  If it worked in her classroom, wouldn’t other teachers find the same success?  How could she share and inspire others to use Iditarod in their classrooms?

The Iditarod Teacher on the Trail™ program was her answer.  Johnson applied for and was selected to serve as the second Teacher on the Trail™ in 2000.  During her tenure as the teacher, Johnson created a well-rounded set of lessons for all curricular areas to follow the requirements of No Child Left Behind.  Her lessons were available at Iditarod.com for any teacher to use.

Andrea (Finney) Auf der Heyde served as the first Teacher on the Trail™ in 1999 and says, “I would like to thank Diane for keeping the Teacher On the Trail™ Program, which is very dear to me, alive and vibrant over all these years. The number of teachers and students it has impacted is pretty amazing! The mushing community has even been instrumental in perpetuating the program.  Thanks for your guidance and the journey, Diane and I wish for you health and happiness!”

Jane Blaile, 2008 Iditarod Teacher on the Trail™, shared thoughts about Diane’s work with Iditarod EDU.  “Diane Johnson has an unparalleled passion for educators, students, and authentic learning experiences.  The EDU was a 24-hour a day work of heart for her – always available to work on the many tasks on her plate.  Over the years she spent overseeing the EDU, it grew and morphed with the times keeping educationally current and globally available.  I don’t remember Diane ever saying “no” or “it can’t be done”; she was a proponent for trying to find a way to make things work in a way best for everyone involved.”

Herb Brambley, 2010 Iditarod Teacher on the Trail™, praised Diane for her guidance of the teachers and the program saying,  “I remember you saying to me that being Teacher on the Trail™ will change your life. For me, you were exactly right. I have to look back and wonder where would I be now, what would I be doing if it weren’t for the Teacher on the Trail™ program. Thank you for all the hard work and building a great Teacher on the Trail™ program. You have moved the program through many changes in education including No Child Left Behind, the push to bring technology into the classroom, and Common Core. Through technology and teacher conferences teachers have been able to share ideas and best practices. With your help EDU has supplied teachers with tools and ideas to make learning a fun and exciting experience for teachers all across the US.”

Diane was spot on with the direction of EDU through all the various changes since Y2K.  Wherever education leaders steered the nation, Diane brought Iditarod EDU in line with the current trends.  She was an advocate for Idita-read Programs, STEM, STEAM and STREAM activities as well as collaborative learning and project based learning.  She’s a dynamic leader in best educational practices using Iditarod theme based activities as well as an Iditarod instructional resource extraordinaire.

Education Committee member and Alaska teacher, Sara Lamont, shares a humorous story about Diane’s physical sense of direction which wasn’t always so spot on.  “Diane has always had a unique sense of direction.  One year when she was returning to the Lakefront Hotel after the Mushers’ Banquet, she ended up getting lost.  As she was looking for something familiar, she noticed the name of a street, Raspberry.  She went a bit farther and saw Strawberry.  She still didn’t know where she was so she continued and discovered Cranberry, Bearberry, and Loganberry.  She eventually found her way back to the hotel.  She later told me she had been lost in the berry patch!  Her sense of physical direction did not improve over the years.  Before smartphones and map apps, I would get phone calls from Diane asking for directions.  I would ask her where she was so I could give her directions.  One time she said she was by some buildings and a stop sign in Anchorage.  Another time she was lost out in the (Mat-Su) Valley and told me she was by a gravel pit.  (The Valley is full of gravel pits!)  Each time with a few more questions and her giving me a few more clues, I was able to help her out.  No matter what she always got where she needed to be!”

A Winter Conference for teachers has been held in Anchorage during the week between Jr. Iditarod and Iditarod since before a teacher ever served on the trail.  It was a way for teachers from within and outside of Alaska to gather, connect and experience the excitement of the race.  Participants were able to network with other teachers of like grades and subjects to share and create learning activities to take home to their students.  While Education Director, Johnson facilitated valuable learning and collaborative experiences for the weeklong conference that benefited teachers from pre-K to college.

Cassandra (Wilson) Brady who served on the trail in 2003 says, “Diane put her whole heart, passion and persistence into making the Teacher on the Trail™ program into an informative venue that promoted both the race and the excitement for learners all around the world.” 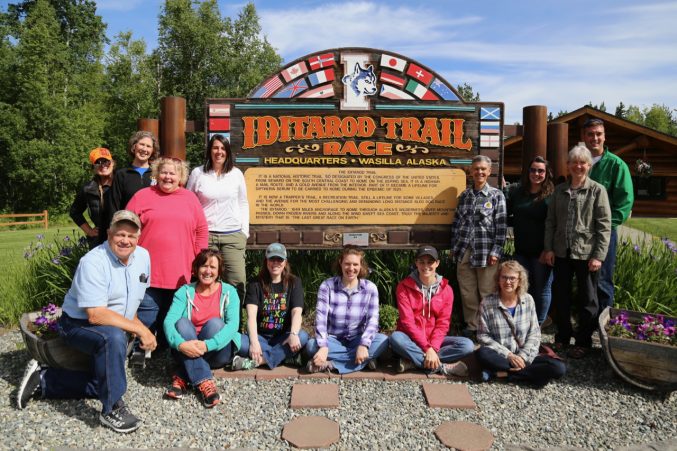 Johnson facilitated the very first summer conference held in 2003. Teachers attending had the opportunity to earn university credit from UAA while learning about Native Alaskan Cultures, the Culture of Mushing, Sled Dogs and Veterinary Care all while sharing hands on experiences with mushers, veterinarians and Native Alaskans.  These teachers returned to their classrooms in the fall energized with a new support group and dozens of new lesson ideas.

Heidi Sloan, 2018 Iditarod Teacher on the Trail™, wrote this, “I remember listening to Diane communicate the value of using the Iditarod to enhance education and thinking, “Wow!  She really has incredible knowledge of the race and how we can use it.”  Diane’s development of the Iditarod EDU opened the door for us to make a huge impact on thousands of students’ motivation by interweaving the Iditarod into our classrooms. I will be forever grateful for that.”

One of the projects Diane initiated in her own classroom was assembling a class quilt.  Each student received a white handkerchief to decorate with a favorite saying, motivational quote or design that was unique to him/herself.  The squares were sewn together to make the top of a quilt that was displayed just outside the door of Johnson’s purple classroom. Every day as students entered they were reminded of the value of teamwork and the importance of each individual in the class.  Midway through the school year, one boy was going to move.  He was especially sad in thinking he’d be forgotten by his friends and classmates.  While standing in front of the quilt, Johnson reminded him that like his square in the quilt, he’d always be a part of this class and he’d never be forgotten.  This was a great comfort to the child.

Johnson brought the quilt project to Summer Teacher’s Camp.  Every year, campers created squares that were assembled into quilts.  As the quilt traveled to the creator’s classrooms across the United States, lessons in character, math, geography, social studies, science and numerous other topics were sparked.  The Iditarod traveling quilt project was and still is extremely popular.  There are more than 20 quilts that travel across the United States from east to west and north to south visiting classrooms each school year.  The quilt project is one of Johnson’s most memorable and far reaching concepts.

When asked about the key factor that allowed her to build Iditarod EDU into what it is today Diane replied, “I was able to develop relationships with educators in every state, especially Alaska, and also around the world.”  As an example, teachers from Norway who wanted to develop a strong education component for their Finnmarksløpet Sled Dog Race attended the Winter Teacher’s Conference to learn first hand what Iditarod EDU was about. 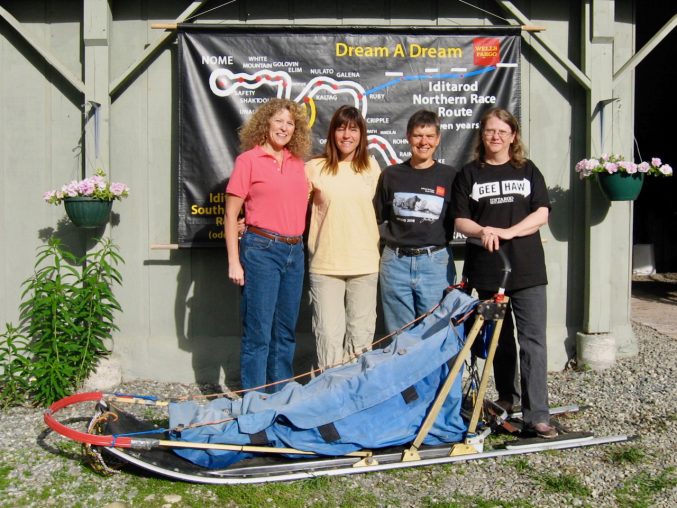 Cathy Walters, 2009 Iditarod Teacher on the Trail™ says, “It is impossible for me to count all the ways Diane Johnson helped me as Teacher on the Trail™. She is everything one could look for in a mentor – a wonderful teacher, boss, and leader but, most of all, a good friend. When I was diagnosed with cancer (requiring surgery, chemo, and radiation – lasting from October to February) in my reigning year, Diane was with me every step of the way: she sent cards several times a week along with weekly gifts, and made frequent phone calls to me and my husband. And when I called to say I might not make it to Alaska, she said, “Oh, yes you will!” I will always be grateful for her kindness and support. Diane’s encouragement – no, her insistence – helped make my Iditarod dream come true.”

Chas St.George (Iditarod Chief Operations Officer) thanks Diane saying, “Diane was our second Teacher on the Trail™, and she has been an integral part of the growth of Iditarod EDU since then.  She steadfastly carried on the tradition of sharing life learning opportunities in classrooms and homes around the world in person or on Iditarod.com.  We look forward to recognizing her accomplishments in a more formal way in 2021.  In the meantime, we want to thank Diane for her commitment to educating our most precious natural resource, our children.”

Heart felt thanks go out to Diane from all the men and women who have served as the Iditarod Teacher on the Trail™ as well as the teachers and students whose professional and personal lives have been impacted through Iditarod Education.  Through your tireless energy and efforts, Iditarod Education is a robust twenty-first century educational theme.  Thank you for giving freely of yourself and sharing your passion of using Iditarod as a theme for education.  Your work and dedication has been felt by more people in more ways than can ever be captured in this or any tribute.  God Speed in your new adventures.