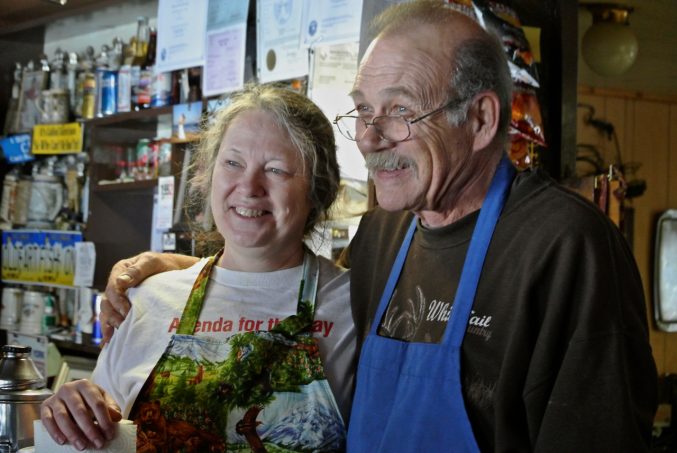 Dan, born in 1946, spent his childhood in Los Angeles, California.  Music was his passion and he soon found his way to the stage, playing back up for some big name singers and opening for others.  While playing in Reno, Nevada he met his future wife and business partner, Jean.  When Jean tells the story of how they met, she claims to have picked Dan up in a bar.

Dan stayed in the Reno area working as a musician and Jean continued to work her day job as a dispatcher for the Reno fire department.  There was talk about moving north – Dan said Idaho, Jean said Alaska.  Neither said anything about the BUSH of Alaska but that’s where they landed. 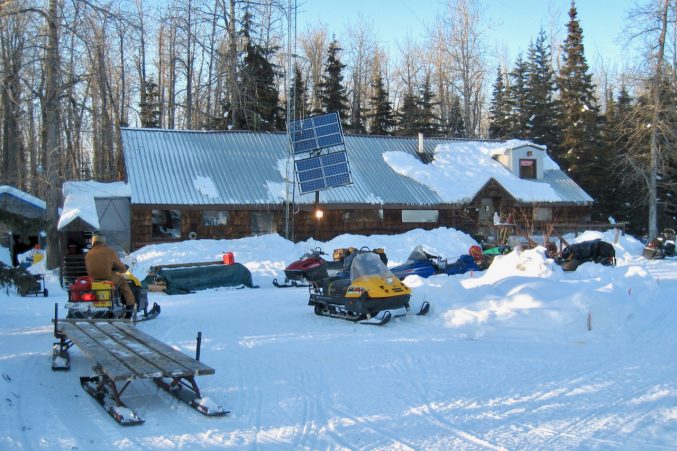 Dan saw the potential of a piece of land across the river from his moose hunting grounds.  That location became available in a public land distribution program.  The stakes they placed on the land in 1981 eventually defined their home and business – roadhouse and lodge for adventurers, sports enthusiasts and travelers not to mention checkpoint for sled dog, manpower and snowmachine races.

The Gabryszaks have eight children and have opened their home to around two-dozen foster kids.  Their adult children have taken over many of the Roadhouse responsibilities and have learned from the best when it comes to maintaining the lodge and serving patrons and guests.

It’s not possible to talk about Dan without mentioning Jean as well as the lodge.  It took a great partnership, an enormous supply of perseverance and a whole lot of patience to build Yentna Station into the indispensible bush layover, restaurant and refueling depot it is today.  Dan and Jean endured through some very lean years. 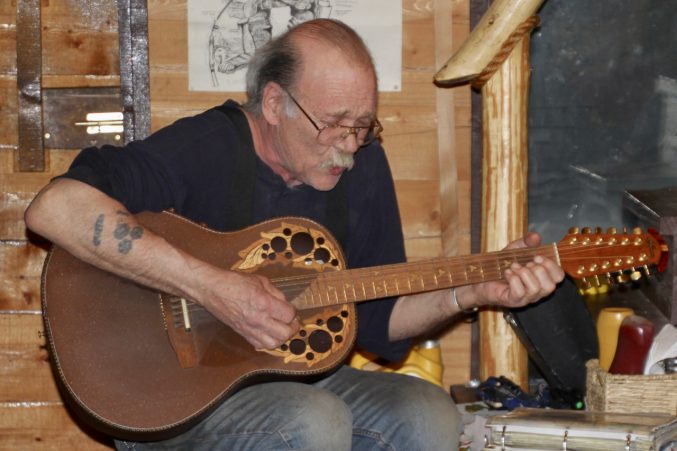 As a teenager, Dan taught himself to play the 12-string guitar and was very good at it.  As the proprietor of a wilderness lodge, Dan was a master of all trades, mostly self-taught, and he was very good at them.  It’s not easy to get a repairman to come out for a house call when you live forty miles from the nearest road.  If necessity is the mother of invention, then Dan should own the patent office.

Was there anything Dan couldn’t do?  When it came to electricity, plumbing, heating, building construction and generators, he could do it all – he had to.  When it came to fishing, hunting and guiding, Dan knew the river and the forests like the back of his hand.  When it came to boats, motors and snowmachines Dan could fix them too.  He kept his axes honed, his saws running and chains sharpened to provide the never-ending wood supply required to heat the lodge. Keeping an active runway on the frozen river in front of the lodge was in his skill set too. 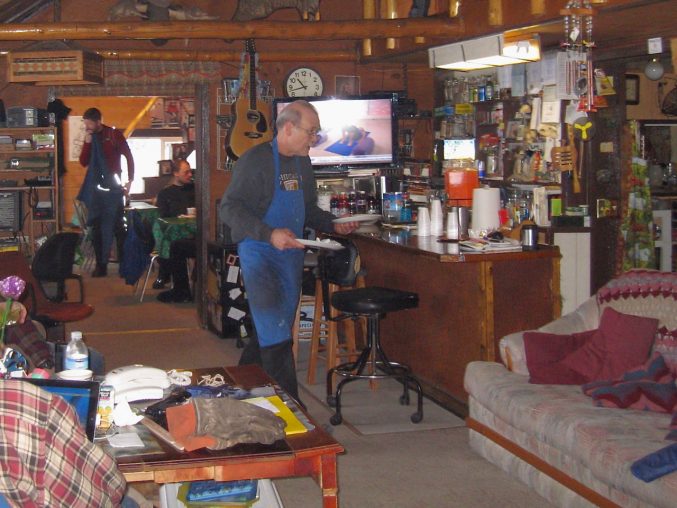 Between cooking, serving and bussing, Dan Gabryszak was always in motion.

You’d have to search long and hard to find a better burger, a finer breakfast or a tastier bowl of soup than Dan prepared and served.  The guy was short order cook extraordinaire.  No wonder bush pilots made a point of finding their way over to Yentna Station around noon to land and enjoy a burger and Dan’s soup of the day.  The view of Denali from the air might have been sensational but it was the visit and the delicious food that made the day and destination special.

When it came to feeding a crew of race volunteers Dan and Jean put together some fantastic meals.  From the twelve or so years I served as the Jr. Iditarod starter/timer at Yentna Station, I remember enjoying turkey with all the fixings, roast pork loin and stir-fry.  Jean took over the kitchen late afternoon to give Dan a break.  When it was time to eat, Dan kept the buffet supplied as lodge guests and race volunteers filled their plates.  Like your grandmother, Dan encouraged everyone to eat more. If you went hungry at Yentna it wasn’t for lack of an abundance of delicious food.  When the main course was complete, Dan bussed the plates then served up dessert.

The Gabryszak brand of hospitality came from the heart.  It wasn’t learned like a person learns to fix small engines or fillet a salmon.  Dan and Jean brought it with them to the big bend of the Yentna River when they staked out the land.  Hospitality was just who they were.

The Yentna Station Roadhouse was a lifestyle for the Gabryszaks.  Their way of living revolved around being kind hearted and serving the people that traveled the river and stopped at the lodge.  Old friends were warmly welcomed and the same was true for new comers.

Without using a fast shutter speed, it’s extremely difficult to get a photo of somebody who is perpetually moving.  Dan was pretty much a blur as he cooked, served food and bussed dishes.  Getting a shot of him playing guitar and singing was the best bet.  It was equally difficult to capture a photo of Dan and Jean together.  It took several years and several tries during the Jr. Iditarod to catch them at a time when they were both in the same room and had time to sit still.

Call it roadhouse, call it lodge, call it checkpoint or call it home like the Gabryszak family, Yentna Station Roadhouse, thanks to Dan and Jean, is the epitome of Alaska’s backcountry friendliness.  Ask any of the Iditarod or Jr. Iditarod volunteers who descend upon the wilderness oasis in late February and early March; they’ll all share different stories praising the Gabryszaks. 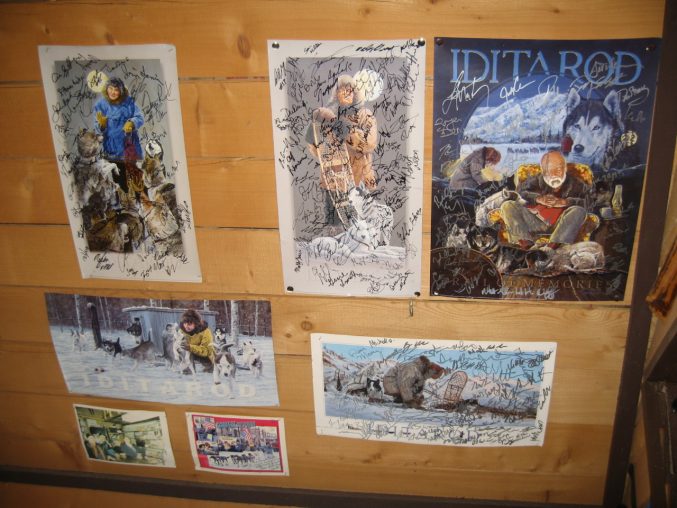 The ceiling of the roadhouse adorned with signed posters is a history of the race.

Musher and Iditarod communications volunteer, Nancy Yoshida, describes Yentna, “The ceilings covered with signed posters are a history of Iditarod.  The evenings are highlighted by guitar and song courtesy of Dan.  Dan and Jean have been a staple of the race for nearly as long as they’ve lived out there.  They open their riverside way station to multiple races every year.  Dan, a wonderful musician and great short order cook was never at a loss for a story.”

Speaking of stories…  One Sunday morning during the Jr. Iditarod, the thermometer was registering minus thirty-six degrees.  The final junior musher had left for the finish line in Willow.  Hungry chilled volunteers walking down the river toward the lodge for breakfast noticed a small object far off in the distance.  It was too far for us to tell what it was and whether it was moving or staying put.  Quite some time later that object, a French speaking skier, made his way up to the front porch of the lodge, removed his skies and knocked before coming inside.  There’s no need to knock at Yentna as the door is always open, but of course, he didn’t know that.  The Ultra Sport skier was returning from McGrath and had camped for part of the night until he was too cold to stay put any longer.  Dan didn’t bother to ask the fellow what he wanted to eat or drink.  He simply handed him hot coffee and while the skier removed his pack and boots and warmed himself by the wood stove, Dan produced a plate heaped with eggs, bacon and hash browns for the nearly frozen skier.  When he finished the first plate, a second then a third plate materialized.  That’s so Dan!

The Teacher on the Trail flies out to Yentna for the Jr. Iditarod layover.  One year the teacher mentioned to Dan that she’d never ridden or driven a snowmachine.  With a sparkle in his eye, Dan told the teacher there was no time like the present to fix that.  She was completely surprised when Dan started not one but two machines.  He gave her the basics of starting and stopping and down the river they went.  Again, that was so like Dan, sharing the outdoor lifestyle he loved. 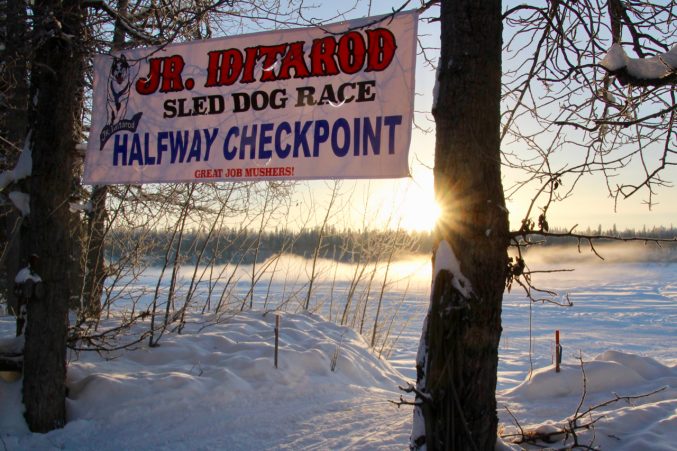 During Jr. Iditarod, the young mushers spend their 10-hour layover camped outside the lodge with their teams.  Dan broke the trails through the woods used for parking the teams and he provided the firewood for the musher bonfire, not just one year but year after year.  Inside Dan and Jean prepared meals for the race volunteers as well as the parents following the race.  Late in the evening he’d often play and sing.  Then, well before the sun was up, Dan would be in the kitchen preparing breakfast for the guests and volunteers.  Not just cereal, toast and jam but eggs made to order complimented with pancakes, hash browns, bacon or sausage and toast – always a mountain of food and there was plenty more where that came from.

Coffee drinkers could bank on the bottomless supply of java found in the tall silver well-worn thermos bottle that sat near the end of the serving counter.  When I was there Dan went the extra mile, kindly bringing out the hot chocolate powder so I could create a Mocha Joe.  Hot coffee was a staple of the roadhouse just like the wood stove, always stoked and radiating heat.

It took grit and determination to build the one-of-a-kind Yentna Station Roadhouse, grow the business and keep it functioning when the economy fluctuated and Mother Nature was stingy on snow or salmon.  Dan had a dream and with Jean at his side they made that dream come true. It was like Field of Dreams; turning “If you build it, HE will come” into “If you build it, THEY will come.”

The Yentna Station Roadhouse is iconic as a wilderness lodge but Dan Gabryszak is a mega icon.  His heart was bigger than Alaska.  His work ethic was exceptional and he was ingenious.  He loved his wife and his family and he loved helping people as seen in all the foster children he guided.  He loved music and enjoyed sharing his musical talents.  He loved the wilderness and he loved meeting and serving people in the wilderness he called home.

Jean, the Iditarod Nation extends sincere and heartfelt sympathy to you and your family.  We thank not only Dan but also all of you for hosting the first Iditarod checkpoint on the trail to Nome and the halfway checkpoint for Jr. Iditarod.  The world is a better place thanks to Dan and we are all better people for knowing him.  May he rest in peace.