Eye on the Trail: Stokey 34th Musher into Nome 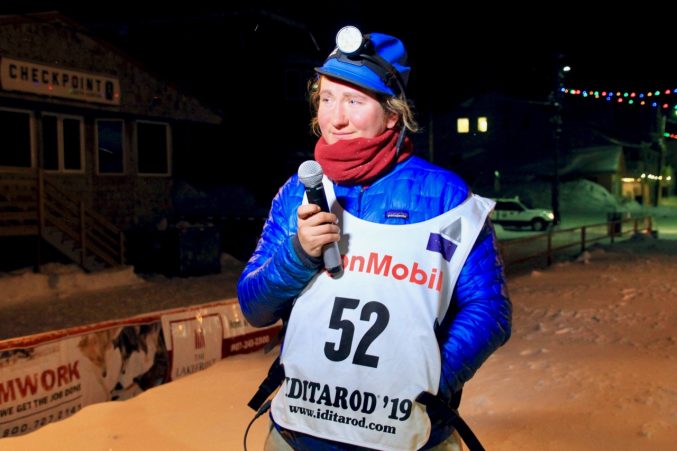 Sarah Stokey was born and raised in Massachusetts.  Since 2010 she’s lived in Seward Alaska to pursue her dream of running dogs.  More than one musher has come to Iditarod through the Disney movie, Iron Will.  Sarah is included in that number.  A year after arriving in Alaska, Sarah met Travis Beals and they began running dogs together.  Now they are partners in operating Turning Heads Kennel.

Sarah said that at one point they were both between.  As things have a way of working out, folks drove into their kennel and asked for a tour. From that very humble beginning, Stokey and Beals now operate a two phase tour business that can transport folks via helicopter from summer to instant winter on the Goodwin Glacier or tourists can experience a summer training run with the dogs via dry land carts over miles of trail around their kennel.

Today marks Sarah’s second Iditarod finish in as many starts. Sarah jogged with her team up the ramp to the Arch.  She previously placed 66th with a time of 12 day, 2 hours and 59 minutes. Sarah took her 24-hour layover in McGrath and her 8-hour Yukon rest in Grayling.  She arrived at the Burled Arch at 06:59 for an elapsed time of 13 days, 15 hours and 59 minutes.

After Beals took the team to the Nome Dog Lot to bed them down and feed them, Sarah talked with insider about here run.  Sarah said the easy thing to do would have been to scratch but I knew we could finish. She also advised that when in doubt rest.  Sarah thanked the people of the villages as well as the trail crews and checkpoint people for their kindness and support as she slowly made her way along the coast from Elim to Nome.

Sarah told Insider that her team was happy but nobody wanted to run up front.  She said it was a real humbling and eye opening experience and we persevered.  The dogs wanted to be on the trail so we changed things up to stay on the trail.  Sarah conceded that it took us longer than we had hoped but we got here.  She said, “Lots of times I wasn’t sure if I was going to finish. I’m stubborn. I don’t like quitting.  My dogs had such good attitudes, if we’d have quit it would have been for my pride and ego and that’s not the right reason.  I had to be the lead dog for the last 150 miles.”