Before Martin Buser headed out of Unalakleet toward Shaktoolik, he put foot ointment on all four paws of each dog on his team followed by fresh booties.  It’s fun watching a musher who is so efficient with his dog care.  Looking a little closer, I saw a small “something with pink stuff in attached to the back of his hand.  Looking a little closer, it turned out to be a Buser invention to make foot care and booting much easier for the musher.  Martin always said, he’d like a third hand for the job but with that not being possible, the next best thing would be to figure out a way to apply the ointment and have both hands free to boot.  Buser took a small plastic k-cup and  somehow attached it to the back of his glove.  He never has to set the tube of foot ointment down, never has to pick it up, it’s always attached to his hand.  Buser says he’s been working on this concept for some time and this is the third or fourth edition.  Once again Martin shows us why he’s called the Master.

Thomas Warner arrived in the checkpoint wearing a strip of coban over the bridge of his nose and across his cheeks, the bitter cold has taken it’s toll on Waerner’s face, especially the bridge of his nose.  Other mushers have been sporting duct tape for the same reason.  The banner to welcome Waerner, Yvonne Debakk and Joar Leifseth Ulsom was hanging on the side of a fish rack above the checkpoint, a very nice welcome from their Norwegian fans.  Waerner had three rolls of runner plastic sitting near his sled.  Different colors are for different snow and temperature conditions, much like waxes used for nordic skiing. 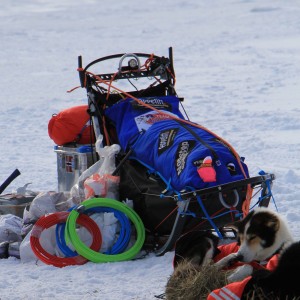 Runner Plastic for all Conditions 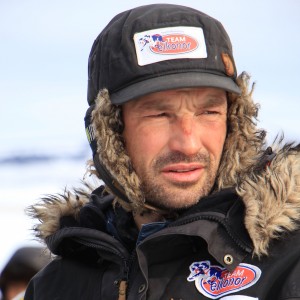 Thomas is a rookie who was born in England but grew up in Norway.  He has dreamed about doing Iditarod since the age of 11.  His first “sled dog” was a Newfoundland dog.  He began mushing in 1984 and is considered to be one of the top mushers in open class sprint, mid-distance and stage racing.  He won Norway’s Finnmarkslopet in 2013.  A race of 1,000 km, Finnmarkslopet is the world’s northernmost sled dog race Thomas and his wife have 60 dogs in their kennel.  His racing partner is 2003 and 2005 Iditarod Champion, Robert Sorlie.  He’s an electrician  who loves not only sled dogs but also old muscle cars, especially Mustangs.

Jason Campeau departed Unalakleet this morning before I had the opportunity to see him.  He’s doing his rookie Iditarod and just a couple of weeks ago, finished his Rookie Yukon Quest.  As the Quest mushers departed Whitehorse, YT in Canada, the temperatures were very near 40 degrees below zero.  Campeau was very experienced with the cold before taking on the first several days of Iditarod 2015.  As a youngster, Jason focused on hockey.  He played both collegiate and professional hockey.  Campeau is a business man who finds time to pursue his passion for sled dogs.  He says the whole family enjoys the sled dogs and works together to make it successful.  Through sled dogs, Jason reaches out to and helps underprivileged children.  When Jason makes Nome in a few days, he’ll have completed his rookie double for both the Quest and Iditarod.  Jodi Bailey accomplished the same feat in 2011.  Jason is pushing toward the front of the pack and may very well capture Rookie of the Year honors.  He finished 7th in the 2015 Quest.

Paige Drobney checked in then brought her team to a stop right behind the Buser dogs.  She quickly spread straw for her dogs to bed down in, took booties off and began to cook a gourmet meal for her canine athletes.  My goodness, her dogs are doing well with Omega 3’s.  Paige had kibble, beef strips and beef fat already in the cooker then she began squeezing fish oil and canola oil, an interesting orange goopy concoction into the mixture.  Paige says her dogs are doing great and she really didn’t experience any significant difficulties with the cold.  She proudly stated, “No Frostbite.”  Drobney is making her third trip to Nome.  In 2013 she finished in 34th place earning her finisher’s belt buckle.  Last year she improved to 25th place. 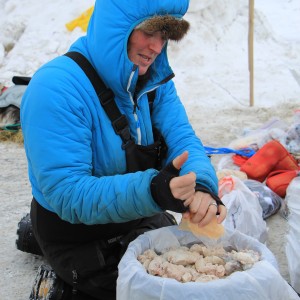 Paige with the Omega 3 mixture 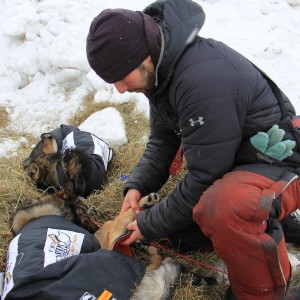 Aniak, Alaska musher, Richie Diehl was very pleased with the performance of his older dogs.  While he was massaging the wrist of a younger female, he praised her as well as her two brothers for how they’ve matured over the course of this race.  Richie cited many factors, especially the cold for affecting his planned race strategy.  Sounds to me like he’s thinking on his feet to respond to the needs of his dogs to keep them healthy, happy and on the trial.  Richie started mushing as a kid.  He put his team together and began racing competitively in 2010.  Deihl has a degree in Aviation Technology.  In his spare time he enjoys flying, boating, fishing and hunting. 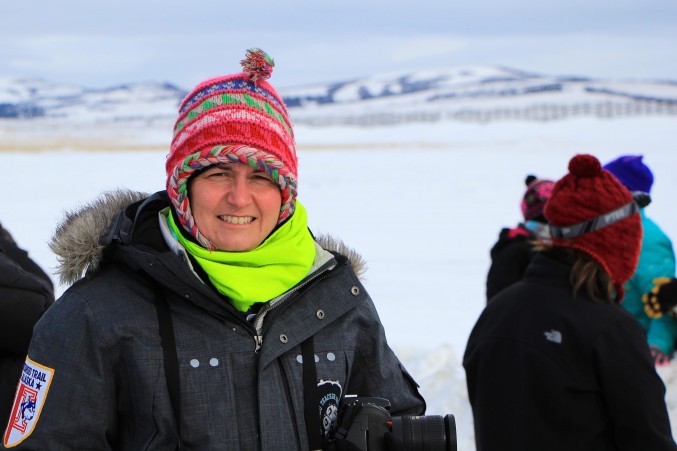 Iditarod™ Teacher on the Trail, Erin Montgomery in Unalakleet

Iditarod™ Teacher on the Trail, Erin Montgomery landed in Unalakleet yesterday afternoon and has been taking pictures, talking with teachers, talking with mushers and posting lesson ideas on the Iditarod Education Portal.