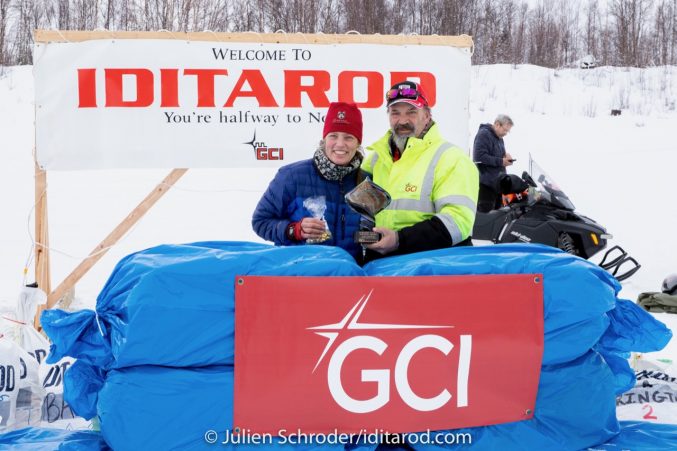 Zirkle has a choice in the award she’ll receive.  Aliy can choose between a new iPhone XS 64GB in gold that includes one year of service or $3,000 in gold nuggets.  Iditarod, an abandoned mining town, lays at mile 431 of the trail to Nome.  Zirkle has a few miles to ponder her decision.

For 25 years, GCI has sponsored this award, which honors the late “Mother of the Iditarod,” Dorothy G. Page. The trophy, which is made of Alaska birch and marble and features a photo of Page, remains year-round at Iditarod headquarters.

Iditarod, now a ghost town, was once a bustling gold town of 10,000.  Dog teams hauled supplies and mail into this.  For the return run, sleds were laden with gold.  Between 1908 and 1925, about $35 million in gold was taken from this area known as the Iditarod Mining District.  At that time an ounce of gold was worth $20.

Looking back to 2018, Joar Leifseth Ulsom won the Halfway Award in Iditarod.  Because the race had been absent from the southern route for a period of 5 years, race officials decided to run the southern route in an “even” year.  Joar’s run from Ophir took 15 hours and 36 minutes.  He arrived in the checkpoint at 20:28 on Thursday evening.

Congratulations Aliy.  Enjoy your long rest in Iditarod at Iditarod.  The photo-guys were not on hand to capture the award so I’m sharing an Aliy photo from the Restart.