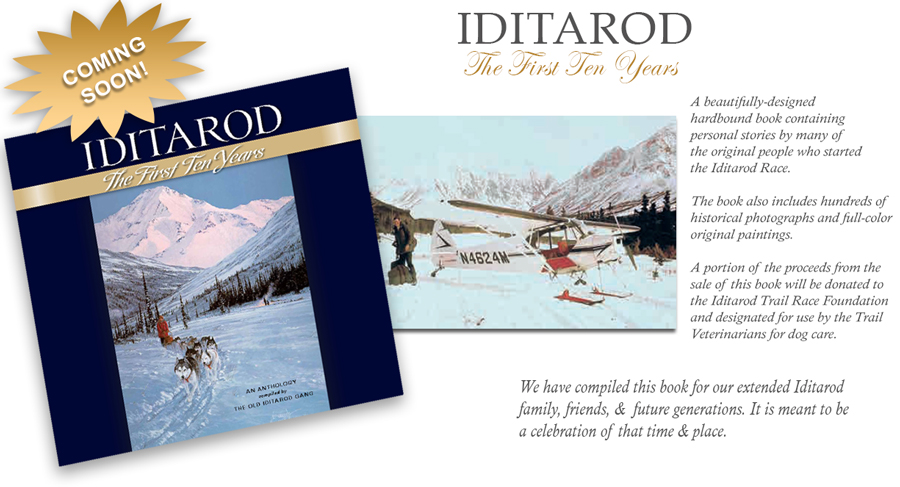 *The book will soon be available through Iditarod and at events during the 2015 Iditarod.  More information will be available soon!

As well as stories and anecdotes from long past races, this book is a celebration of the dogs, their history, and their origins.

They didn’t just arrive at the start line of the first Iditarod in rusty old trucks, they came from somewhere, and the “somewhere” roused my curiosity. Curiosity became interest, interest became obsession, and obsession morphed into piles of books and gallons of midnight oil. Somewhere along the way I elected/or was elected to write a simple essay on the dogs. The ‘simple’ turned out to be not so simple, evolving instead into a fascinating journey—but where to begin…

To chronicle the journey, I followed archeological and DNA evidence back into time in search of a plausible starting point–and found it–in a cave in the foothills of the Altai Mountains of what is now Mongolia. An intact canine skull unearthed and dated at 33,000 BP by Russian archeologists showed early evidence of morphological change from ancestral wolf to domesticated dog. The skull’s proximity to stone tools substantiated the animal’s relationship with archaic ancestors of North America’s Athabascan peoples.

It seemed from thence, and probably other places like it, that they came–not alone. They came as hunting partners, guard dogs, and perhaps even pack carriers for the Athabascan ancestors.  Through countless generations, cultural evolutions, and climate shifts, the hunters and their dogs drifted northward and eastward in a warming world. Ever following the herds, their mobile food supply, they eventually crossed Beringia into what is now Alaska and Canada–first inhabiting the ice free plain north of the Brooks Range, then breaching the widening gaps in the melting glacial wall–over passes, down rivers, and into the great central valleys of the continental interior–where they found the essentials for life in enough abundance to establish permanent homes–the journey’s end.

Imagining their odyssey, while searching out words to describe it, one dark and quiet night, letters and words, seemingly of their own accord, crystallized on the screen above the keyboard into a semi­ facetious, hyper­condensed version of the story. It wasn’t appropriate to the tenor of the book but it seems a fit here. The longer and serious version, “The Dogs; A History”, is a part of the book. The major source material is listed in a bibliography in the end pages.

After a grueling pursuit of elusive bison the entire family was worn out. Up one side of Anaktuvuk Pass and down the other, they trudged onward beside the John River, down the backside of the Brooks Range, toward they knew not where. Everyone was grumpy, the baby needed changing, the thermos was empty, and grandma was limping again–though everyone suspected she was faking it. The dogs lagged behind, their packs dragging on the rocky ground–too tired to bark. The family was a long way from Lake Baikal and home and with daylight fading, they were desperate for a place to camp.

It was 6:45 ‘Alaska Daylight Time’ and nearly dark, when in desperation grandpa cried, “SWEET JESUS!!—GIVE US A SIGN!!”.  And immediately, a big green sign appeared in the sky— JUNCTION–KOYUKUK RIVER / ALLAKAKET–15 MILES.

And it was there on the banks of the Koyukuk River that they found a sheltered swale, dry firewood, and a sparkling creek alive with oncorhynchus keta. In the morning grandma said, “I like it HERE!!!”, and that’s as close as historians will ever get to how the first Athabascans and the first “village huskies” came to the Koyukuk Valley….. Joe May