For the first time in Iditarod race history, Huslia (HOO-slee-uh), hosts the race’s halfway checkpoint in 2015. Considering the village’s mushing history, how appropriate that the race turn north from Galena to this village on the banks of the Koyukuk River. A village of around 300 people, well-known names in the world of dog racing include Huntington, Vent, and Attla. The school is named for Jimmy Huntington and George Attla, famous for sprint mushing, recently died at age 81. People traveling to Huslia arrive by air, dog team, or snowmachine, and by boat in the summer. 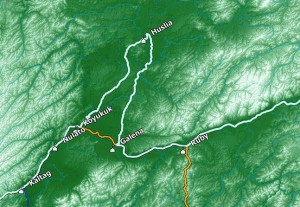 George Attla and Bobby Vent of Huslia ran in the inaugural Iditarod race in 1973.

The movie “Spirit of the Wind” is a semi-autobiographical story of George Attla and his rise to fame.

The last, new checkpoint in Iditarod 2015 is Koyukuk, located at the confluence of the Yukon and Koyukuk Rivers. The Athabascans living there traveled where the animals, their food, migrated and had twelve fish summer camps between the Koyukuk and Nowitna Rivers. After the Alaska Purchase, a US military telegraph line was strung on the Yukon River’s north bank and Koyukuk became the telegraph station location. The gold rush of 1884-85 brought prospectors who got supplies from steamboats on the river. When the first school was built in the 1930s, the people began living in the village year-round. Its population is about 100 now.

Erosion is a threat to the village of Koyukuk.