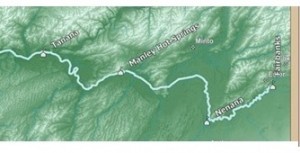 Iditarod 2015 sees five unique checkpoints on the trail. First on the list is Nenana, the checkpoint teams go through after leaving Fairbanks. Travelers can reach Nenana via air, water, or road. Russian traders began trading as early as 1838 with the native people there. Nenana represents the westernmost edge of the Tanana people. European Americans first knew the village as Tortella and its name later became Nenana, for the people who lived there and the Nenana River it sits on. Gold discovered in the Fairbanks area in 1902 brought more people and the railroad construction, swelling Nenana’s population to about 5,000. The Episcopal Church established a mission and school in the area. After completion of the Mears Memorial Bridge, which connected Anchorage and Fairbanks by rail, workers left the area and the population dropped to 291 in the very early 1930s.

.Nenana is the beginning point of the sled dog team relay to deliver diphtheria antitoxin to Nome in 1925, the medicine being delivered to Nenana by train from Anchorage.

The Nenana Ice Classic, with its roots in the 1917 wagers of Alaska Railroad surveyors awaiting the ice breakup so supplies could be delivered by boat, is held every spring. Tickets for the event go on sale in February. Participants write the date and time of day they think the ice will break up. Breakup is determined by a tripod pole placed on the river ice connected to a clock. When the poles shifts enough to stop the clock, that’s considered breakup.

Manley is the second checkpoint in Iditarod 2015. As of 2010, 89 people lived in Manley. Manley was established because of the hot springs found in the area, leading to the construction of a hotel to attract people who used the hot springs. Manley, first named Baker’s Hot Springs, was also the point for supplies and service for miners in the area. At its height, the population numbered 500. Located about 5 miles north of the Tanana River, Manley can be reached by air or by the Elliott Highway from Fairbanks.

The town name was changed to Manley Hot Springs in 1957, recognizing Frank Manley who built the Hot Springs Resort Hotel in 1907.

The Elliott Highway, Alaska Route 2, was completed in 1959, but until 1982, it was not plowed during the winter and was closed. It’s a 50/50 combination of pavement and gravel.

Tanana, the third checkpoint in 2015, is located at the confluence of the Yukon and Tanana Rivers. This area has long been a trading and meeting location, dating before nonindigenous people arrived. Serving as a location for Fort Gibbon in 1898, the town moved itself a little further upriver. Steamboat traffic and gold mining, as well as the fort, increased the population and activity. A church mission was established and after the fort closed in 1923, the town and mission remained. Inhabited by about 259 people, Tanana covers 15.6 miles, 4 miles of that being water. About 250 people live in Tanana now.

Walter Harper was the first man to summit Denali on the 1913 expedition with Hudson Stuck and Harry Karstens.

In 2014 construction on a road to Tanana from Manley began, expected to be completed sometime in 2015. Until then, access to Tanana is by air, river, or snowmachine.

Look for another post about the villages of Huslia and Koyukuk, the remaining new checkpoint locations for Iditarod 2015.