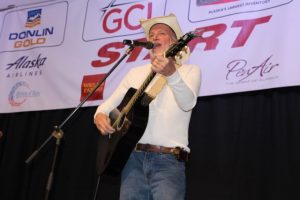 Hobo Jim will receive an honorary degree, Doctor of Music from UAA on May 5th during commencement ceremony.  Jim (James Varsos –  the Alaska State Balladeer) has been writing and performing songs about life in Alaska –sharing Alaska’s history, culture, and Iditarod to fans around the world for more than 40 years.

Hobo Jim created the famous Iditarod Trail Song in the middle of the night before he was to perform it at the1981 finish line in Nome.  He wrote the words to the song the next morning on a placemat  – taking about 15 minutes to finalize the song.

Away up in Alaska
The state that stands alone
There’s a dog race run from Anchorage into Nome
And it’s a grueling race with a lightning pace
Where chilly winds do wail.
Beneath the northern lights, across snow and ice
It’s called the Iditarod Trail.

Chorus:
Well, give me a team and a good lead dog and a sled that’s built so fine,
And let me race those miles to Nome, one thousand forty-nine
Then when I get back to my home
Hey I can tell my tale
I did, I did I did the Iditarod Trail.

Well the race it won’t be easy
For the masters of the trail
And some of them will make it and some of them will fail
But just to run that race takes a tough and hardy breed,
And a lot of work done by the dogs
that run across snow with whistling speed.

I just pulled out of Safety
And I’m on the trail alone
I’m doin’ fine and I’m pickin’ up time
And headin’ on in to Nome.
There’s no sled tracks in front of me
And no one’s on my tail
I did, I did, I did the Iditarod Trail!

*Read more about Jim in the book, Iditarod, The First Ten Years.