A look at Teams Further Back on the Trail

Many teams are resting and taking their 24 hour layover right now. A few select teams have taken it very early on in Tanana, which equates to taking a 24 in Finger Lake. Although an unconventional move, it might have paid off. For Lance, that decision was not quite voluntary. He waited for his brother Jason to catch up and now they are traveling down the trail together. Jason is helping his brother to put booties on the dogs. Race rules state that a musher can help another musher. I bet you Jason is pretty tired of putting booties on up to 28 dogs in these temperatures. On the upside, both teams travel at a fair clip on a hardened trail. 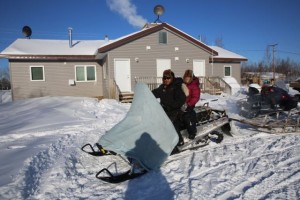 The Huslia way to keep a snow machine warm

Rick Casillo also rested in Tanana, left there in almost 70th position, and is now in a mid 40th position into Galena with 12 dogs. If he can keep those 12 dogs together, he will climb somewhere towards 30th place, assuming he rests about 5 hrs there. By the time he, Lance, and Jason make it Huslia, they might be catching more teams and be in the 20s. For all 3 of them, that is not a winning strategy, but it is a strategy which has kept their teams in the race despite problems. They adapted to the challenges, instead of pulling out. For Lance to enjoy the trip the best he can, it might be his last one. A tough one all around. For Rick, to show a new team the trail and checkpoints. Let’s see where the teams which rested early end up in the final standings in Nome.