Manley Hot Springs is waking up

Manley is waking up. Waking up to 30 below that is. The checkpoint building is quite a ways away from the doglot. In these temperatures that is a good thing, gets the blood circulating again once mushers walk up here. They have great food waiting and then the mushers can go to the school to sleep. 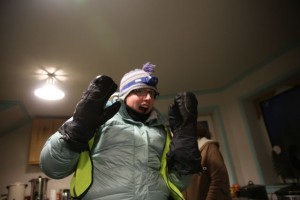 Kelly getting ready to check mushers in

Nicolas Petit had been sleeping next to his dogs, without a sleeping bag, now warming up here. Him and Quest Champion Brent Sass are swapping stories. Nick is pulling plastic tobogaans behind his sled, one having a full bale of straw in it. He was joking “ I am grooming the trail for everybody”. 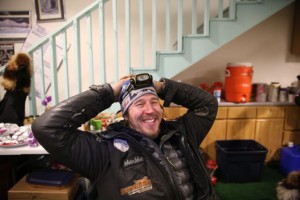 Brent who runs a very traditional sled, just with a little flip down seat, comments: “ I could not even think about towing anything behind.” Both of them joke: “ Did you see Kelly Maixner “ He is skipoling and having 4 dogs in this sled. That about sums up the different strategies at this point. Nick is running a very young team. He only has 5 dogs from last years team in his squad. There are quite a few younger dogs in his group. He likes the youth of this team. Each musher seems equally pleased with their strategie. Kelly said: “ I am right where I want to be, at 8 miles an hour, it worked for you Sebastian, didn’t it. “ Indeed it did work for me, although I never hauled any dogs. Matter of fact I always dreaded hauling dogs, like carrying Bananas into Nikolai once for 50 miles. In hindsight, looking at what many mushers do now that should have not mattered at all. 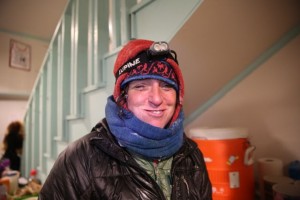 Michelle Philips, came in nicely frosted up asking Matts Peterson: “ Was that you who passed me earlier there ?” It is much different in the Iditarod than in the Quest In the Quest Mushers know their surrounding teams pretty quickly, here are many more teams. It will take a while longer, before they break up in distinct groups. 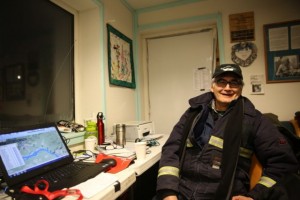 Brent is on home turf here. He has been training near Manley all winter. Pam and Joee Redingtons homestead is one of his “ training checkpoint “. He thinks his dogs will be pretty exited leaving here, anticipating to go there. 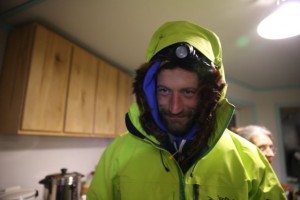 Notably, both champions of the past 3 years, Seavey and Seavey are both not here yet. Neither were they present anywhere near the front during the last 3 years races. They both seem to be sticking to their conservative starting strategy. Tom Huntington wisely said: “ History tends to repeat itself all too often “. Time will tell…

Time will also tell if we have any chance to get the iron dogs started in these temperatures. Happy trails! Sebastian