As the final mushers make their way into Unalakleet, volunteers all along the trail are still hard at work. Due to weather I was in McGrath for four days waiting for a flight to Unalakleet – I finally made it last night, in time to help some return dogs get offloaded from planes, and help the scratched mushers from Shaktoolik settle their dogs in the dog yard. I followed the scratched mushers to the checkpoint.   At the checkpoint, I got to chat with Ryan Santiago and Martin Apayauq Reitan before they left Unalakleet last night for Shaktoolik – both are in good spirits, and were very excited to get back on the trail after resting in Unalakleet! 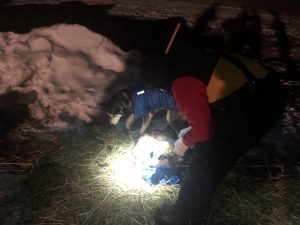 Ryan Santiago putting booties on his dogs before leaving Unalakleet 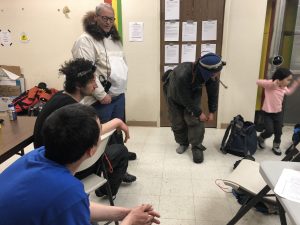 Volunteers in Anchorage have also been hard at work receiving “mushergrams” from fans all around the world, little notes that the mushers will pick up in Unalakleet and most will carry with them down the trail (I still have an envelope with all my mushers grams from last year in it!). When you reach the coast you’ve already traveled over 700 miles across Alaska, it can be daunting to think about having to travel another approximately 300 miles up the coast to the finish line in Nome. Mushergrams are a great way of giving the mushers a bit of a pick me up from Unalakleet! The phone number for mushergrams is 907-248-MUSH (6874), you get to talk to the wonderful volunteers at the Anchorage phone room that can also answer questions you have about the race. 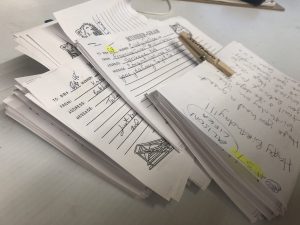 Mushergrams waiting to be passed out to mushers in Unalakleet