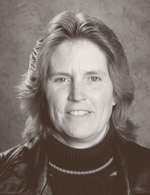 Lori Townsend, 43, was born in Washington. She lived in Minnesota 18 years and came to Alaska in 1982 to start a fishing/hunting guide service with her husband, Rick. They ran the Aniak Air Guides for 25 years and recently sold it. She began mushing in 1987 and after Rick ran the Iditarod for the second time, she decided to try the Race. After her last Iditarod in 1997, they sold their dogs and gear and “thought we were done.” The five years later they began getting breeding dogs from Doug Swingley and raising their own team again. “So here I am—running it again! Once you’ve done it, it won’t leave your blood!” Rick and Lori are the parents of Angela, 18. Lori says her special interests are dogs and golf.