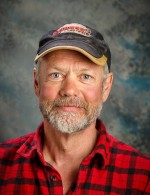 Billy Snodgrass, 59, was born and raised on a ranch in central Wyoming. He is a fourth generation Wyoming cowboy. Billy has spent the last 10 years outfitting and dog mushing in the mountains of Dubios. He says, “I run the Iditarod for the adventure.” He lives with his horses and 140 sled dogs and owns the Distance Dog Food Company and Continental Dog Sled Adventures. He began mushing in 1981 and used dog teams to get into his ranch. He says he wanted to run Iditarod ever since he first started mushing. He has finished the Iditarod four times and competed in many mid-distance races. He has three grandchildren and says he loves tennis and a “good beach.” His life motto is, “It’s a great day to be alive—if you don’t think so, you’re going to have to leave—because you’ll only bring the rest of us down.”