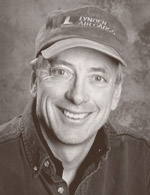 Born in Alaska in 1953 and raised in Minnesota, Ed Iten's childhood dream was to return to Alaska. He returned to Alaska in 1973 to finish college and enjoy Alaska's wilderness. After graduating from the University of Alaska at Fairbanks with a major in art and minor in biology, Ed lived on the upper Kobuk River with Inupiaq Joseph Harvey. It was a sparse but rewarding time learning the ways of survival in the arctic. Ed's years have evolved into working carpentry in the summers in Kotzebue and spending his winters on the Maniilaq River. It was during a trip to Kotzebue for work that a friend talked Ed into running his team in the Kobuk 220 mile sled dog race. In 1986 Ed's rookie team finished minutes behind champion Herbie Nayukpuk. From then on the two racers shared a special relationship and "I was hooked," Ed says. That same year Ed met his wife Ruth who shares his love for the country and the dogs. They spent the next ten years living "up river", raising their two children, Katie, 18 and Quinn, 16, and sending Ed off to the races. He has won the Kobuk 440 seven times and the Kuskokwim 300 in 2004. His highest finish in the Iditarod was second in 2005 and he is the proud recipient of the Leonhard Seppala Humanitarian Award in 2007.  In 1996 Ed and his family built their home twenty-five miles from Kotzebue on Kobuk Lake. No roads lead to their kennel, they travel winter trails by dog team and cross the lake in the summer by boat. From their home they work on breeding and training a team that has what it takes to become Iditarod champions. He lists his hobby as anything outdoors.