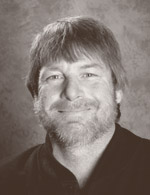 Rick Larson, 42, was born in Montana. He began mushing in 1999 and the Iditarod was his goal from the beginning. He started with three Alaskan Huskies and built a kennel which now has 42 Huskies. He started by working as a handler with Terry Adkins’s kennel. He says, “After a devasting scratch in 2006, I’m coming in hopes all will go well. An equipment operator for thirteen years, Rick, finished the Iditarod in 2004 only to learn that his home had burned down while he was on the race. He is married to Sandy. They have an adult son, Duane. Rick says he enjoys hunting in his spare time.