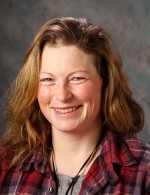 Miriam Osredkar, 38, was born and raised in Chardon, Ohio. She received her B.A. from Oberlin College in 2000 with a major in biology. She began mushing in 2006 and became interested in the Iditarod while working for Iditarod veteran, Frank Teasley, in Jackson Hole, Wyoming. While in Jackson Hole, she also was a back packing guide in Yellowstone National Park. She says she’s been tour guide for the last 10 years. Miriam moved to Alaska in 2011 to pursue her dream of running dogs. In her spare time, she enjoys hiking, kayaking and singing.