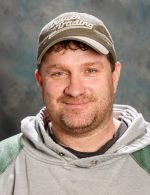 Nathan Schroeder, 39, was born and raised in Warba, Minnesota. He graduated from Mesabi Range Community and Technical College in 1999 as a maintenance mechanic. He has worked as a millwright in Local 1348 for the last 17 years. Nathan was introduced to mushing at the age of 12, when he was given a ride at an elementary school behind a team of malamutes. His goal was simple. He wanted to race the Iditarod. In 2014, he realized that dream and won the rookie of the year award. He has raced numerous races in the “Lower 48.” He is a four time champion of the John Beargrease Sled Dog Marathon. Nathan says, This will be my fourth Iditarod and I see myself racing it forever. I just can’t get enough!” Nathan has three young children: Gavin, 7, Sawyer, 4 and Kinley, 3 and they “come first in life.” He enjoys “fishing fishing and kids.”