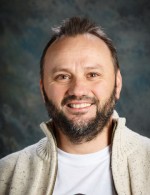 Otto Balogh, 40, will be the first Hungarian ever to race in the Iditarod, fulfilling a childhood dream that came from reading Jack London. Otto always longed to travel, and studied geography in the hope it would give him such a chance. Soon realizing that working in business would be more likely to deliver the money and time he would need for travel, he launched a successful decade-long career as a network marketing sales leader, motivational speaker and bestseller writer. Then he realized he’d reached the “now or never” point in his life to realize his childhood Iditarod dream. With a bit of luck on his side, Otto was able to train with Dallas Seavey, the 4-time Iditarod Champion, and complete the qualifying races with Seavey’s B-team. When he’s not training and racing in Alaska, Otto lives in Budapest and loves fishing, playing soccer, reading, studying astrology, and engaging in development training and executive coaching. Otto is keeping fit mentally and physically in Budapest by calisthenics, Pilates, Jack Kruse’s Ice therapy and Wim Hof Method (against cold) before he returns to Alaska for his final preparations to compete in the Iditarod in 2017.