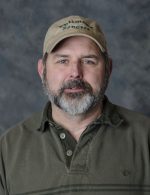 Tom Schonberger, 50, was born in North Dakota and raised in New Mexico. He attended New Mexico State University, where he earned a BS in Secondary Education in 1990 and a commission as a second Lieutenant in the US Air Force. He followed that with an MS in Management in 2000 from Troy State University. He was stationed at Elgin Air Force Base in Florida and was then transferred, courtesy of the Air Force, to Alaska in 2000. He soon found a way to stay in Alaska and continue to serve his country by accepting a position in the Alaska Air National Guard. Tom and his wife, Mary, are the proud owners of TouchMeNot Siberians, a small working and showing kennel located in Chugiak, Alaska. The “Pack” as they are commonly referred to, was awarded the Siberian Husky Club of America’s Working Showing Trophy in 2014 and again in 2015. Tom began mushing in 2001 and has been working toward his first Iditarod since 2015 when he started running qualifying races. He is a member of the National Eagle Scout Association, the Philmont Staff Association, the Siberian husky Club of America and the Siberian Husky Club of Anchorage, Alaska. Tom is an Eagle Scout and shares this honor with his Father and his 2 brothers. He lists his hobbies and interests as fishing, hiking and “beer tasting”.