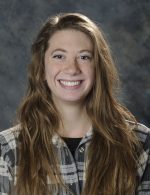 Tara, 26, was born and raised in Tonawanda, a suburb just outside Buffalo, New York. After completing her B.A. in English at Canisius College, adventure and the pulls of Alaska called her name. She applied and was accepted to KNOM Radio’s Volunteer program, and moved to Nome, Alaska in August 2013. It was there she learned of the mushing world through covering various sled dog races and witnessing her first Iditarod finish.

While working at KNOM, she was introduced to a local Nome musher whom she worked with for her first season in the sport. She ran and completed her first-ever race, the Kuskowim 300, in 2015. She spent the 2016 season watching from afar, but after trekking back to Nome to watch her third Iditarod finish, she knew she had to go back.

Tara and Kristin Bacon met during the 2015 season, as Tara hosted Jeff King and handling crew in Nome for the 2015 Iditarod. Tara and Kristin joined forces in September 2016, as Kristin and doggies warmly welcomed Tara to the Bacon’s Acres Team. Tara is beyon excited to be running dogs of Bacon’s Acres for her rookie Iditarod!