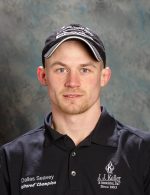 Dallas Seavey, 30, was born in Virginia and his family moved back to Seward when he was five. He is a third generation musher who grew up helping his dad, Mitch, the 2004/2013/2018 Iditarod champion, train his racing teams. He ran the Jr. Iditarod four times and in 2005, Dallas became the youngest musher in history to run the Iditarod. He also wrestled for Sky View High School and spent one year training at the U.S. Olympic Training Center. He is a High School State Champion, a Jr. National Champion, and was on the 2005 Jr. World team. In 2009, he and his family moved to Willow to “train our Iditarod team.” Dallas’ current occupation is being a keynote speaker. In 2011, he won the Yukon Quest and in 2012, he became the youngest Iditarod champion in its history. He is one of four mushers ever to hold a championship in both the Yukon Quest and the Iditarod. Dallas and his wife, Jen, also an Iditarod veteran, are the parents of seven year old Annie.