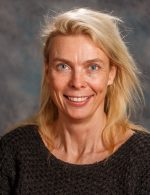 Mille started mushing in 1992, running a team of Polar Husky sled dogs for polar explorer Will Steger on a three-month-long dog sled expedition in Canada. She was hooked. Ever since Mille has lived with her sled dogs to experience the people and places in the magical North while finding ways to be sharing the adventures with people around the world. She has slept more than 1,000 nights in a tent on the dog sled expeditions and feels home anywhere in the circumpolar Arctic. Mille has done 15 long-haul expeditions with her Polar Husky freight dogs. Each expedition lasted two to six months and was as long as 3,000 miles in Greenland, Russia, Sweden, Norway, Finland, Alaska and crisscrossing Canada. In 2011 she entered her first sled dog race, running the 800-mile Nadezhda Hope race in Chukotka, Russia. Mille then moved to Alaska with Team Racing Beringia and her then partner. Together they trained and raced with great success that culminated in 2018 with his Iditarod championship.

Mille was born and grew up in Denmark until she came to America and did her first dog sled expedition at 18 years old. Her great-grandfather founded the world’s first Arctic research station in Greenland. His sons traveled Arctic North America by dog team and canoe in the 1920’s, the “normal” son being Mille’s grandfather who left Greenland to live back in Denmark. Growing up Mille would sit in his basement surrounded by drawings, mystical carvings and seal skin clothing, listening to his adventures as a kid across the ice with his sled dogs. That’s when Mille decided she wanted to grow up to live her life with sled dogs.

The 2020 Iditarod Rookie of the Year, Mille in 2021 was the proud recipient of the Leonhard Seppala Humanitarian Award for her care of the dogs during the race, while she set a new time-record for mushers from outside the US. Mille lives in Alaska with her sled dogs, but she is still Danish. She will be racing the 2023 Iditarod for Team Racing Beringia.