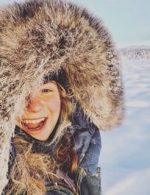 I grew up on Cape Cod, Massachusetts and have always been a lover of dogs and the outdoors. After graduating from college in 2015 I moved out West to build hiking trails with the Montana Conservation Corps. I began mushing in the Boundary Waters Wilderness of Minnesota in 2016 where I guided youth on winter camping expeditions for the Northern Tier High Adventure Scout Base and drove teams from the Chilly Dogs, a nearby kennel of retired racing dogs. In 2018 I moved to Alaska and have been here ever since! I have lived and worked with The Shameless Huskies, a small racing kennel in Willow, Alaska, owned by Kathleen Fredericks. Like most mushers, my life hasn’t been the same since I first stepped on the runners. I have wanted to run the Iditarod since coming to Alaska and have spent the past two winters with this goal in mind as I began competing in mid-distance races. I thrive in situations of true wilderness exploration, self-sufficiency and adventure, and I am so excited to be taking the dogs I have raised and trained for the two years.