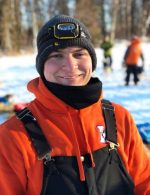 Dakota Schlosser, 22, works as a diesel/heavy equipment mechanic for Knik Construction. He has been racing sled dogs for the last 17 years. He moved to Alaska from Wisconsin in 2012 and this is when he switched from Sprint racing to Distance racing. Dakota has a competitive race kennel that he has raised mostly from puppies. He competed in Jr Iditarod in 2014 & 2015, receiving 4th place finishes and Rookie of the Year. Last year, Dakota raced Alpine Creek 300, Kusko 300, Willow 300 and Tug Bar 150. He was honored to accept the Humanitarian award for the Alpine Creek 300 race. For those that know Dakota, they realize that Iditarod was a long time dream since he was 10 years old. This is the year that he is going to make it happen. He may be a wildcard, but anything is possible with his determination. You can follow Dakota at Sled Dog Systems Racing on Facebook for updates.