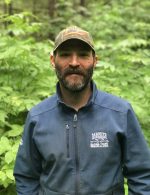 Hal Hanson, 42, was born and raised in Stillwater, Oklahoma and grew up on a ranch taking care of livestock. Hal took an interest in training animals at an early age and became a cow-horse trainer for his dad by the time he was 12. Working with horses became a passion and in 1999 he became a full time farrier. His farrier business took off due to his skill with horses and the business eventually grew to serve a five-state region around Oklahoma. By 2013 Hal was tired of 110-degree heat and decided to go north in search of cooler weather. Having always been intrigued by the immense challenge of the Iditarod Sled Dog Race he found himself in Alaska. He spent his first three years in Alaska training sprint dogs on the Yukon River learning from the locals. In 2017 he moved to the Kenai peninsula to learn long-distance mushing and found himself working for Mitch Seavey as a trainer.