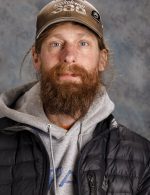 Dennis moved to Alaska in 1997 and can’t imagine living anywhere else. Alaska has provided him with much opportunity and a lifestyle that affords him to live under his own terms much of the time. A lifestyle many in the lower 48 wouldn’t understand or even consider. Dennis ran the Iditarod in 2004 and finished 29th. Sixteen years later he has decided to run it again. He took a ten-year hiatus while he re-established himself and learned the trade of telephone lineman through the IBEW apprenticeship program. In 2013 he acquired 11 sled dogs from a friend and two leaders from Jason Mackey. It was inevitable that he would enter the Iditarod again. For the past six years Dennis has been building his Outlaw Kennels while breeding dogs and running many races, from small sprints to the Kuskokwim 300. All dogs he plans to run in this year’s race will have been born at Outlaw Kennels and selectively bred. After completing the 2020 Iditarod last year with a young team of three-year olds and two-year olds, Dennis has decided to enter the 2021 Iditarod because he feels that he and the dogs can both improve in this year’s race.