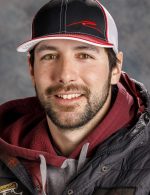 Richie Diehl, 34, was born and raised in Aniak, Alaska. He graduated from the University of Alaska Anchorage in 2008 with a Bachelor of Science degree in Aviation Technology. He’s been working as a carpenter in Aniak the last ten years. He says he began mushing “as a kid” and has been racing competitively in Alaska since 2010, having completed the Kusko 300 several times as well as the Paul Johnson Memorial 450 in its inaugural year, 2012, and the Iditarod seven times, his best finish being sixth in 2018. He lists his hobbies as hunting, flying, fishing and boating.