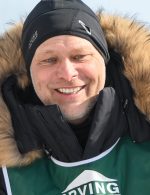 When I was eight I put a harness on our house dog, a big St. Bernard !!! Then one day I saw a team of several dogs and that’s when I realized that I wanted to harness more dogs. As a teenager I was doing sprint races, and it was only in 1996 that I actually started doing longer distance races, racing from 60 miles to a 400-mile race in the same year, the Labrador 400. I climbed the ladder and I started winning the Can Am Crown 250 (Fort Kent, Maine) in 1998, then in 2019 I won it for the 10th time, six in a row. I did the race circuit in North East North America, but in 2003 I realized one of my dreams by running the Yukon Quest (1,000 miles) where I placed sixth. I won the Hudson Bay Quest in Manitoba (220 miles) twice and I placed second at UP 200 in Michigan many times. When I was a teenager I saw a video from Iditarod and from that moment I dreamed of bringing my sled dogs to such an athletic level to be able to run that famous race the right way. What I like most about dog sledding is to be in the nature, discover new territories and especially to listen to my dogs and to see that we are an amazing team between human and the beast.