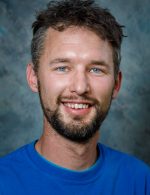 Deke Naaktgeboren, 37, was born and raised in Pella, Iowa. He went to Western State College in Gunnison, Colorado, where he earned dual degrees in Business and Recreation. Before moving to Alaska so he could run Iditarod with his own dogs, Deke lived in Everglades City, Florida, where he was a park ranger in the Everglades National Park. Deke lives off the grid north of Fairbanks, Alaska with his son and 35 Alaskan Huskies. He spends most of his summer in the 40 Mile Country, and works for the BLM. He began mushing in 2008 and has run a number of distance races since then. He had the time of his life running the Yukon Quest and feels ready this year to take on the Iditarod, a dream he has had since he adopted a Siberian Husky, Nautique, who showed him that sled dogs can really fly! Deke is the father of Nolan, 3, and lists his hobbies as “being a dad,” fixing things, and mowing the lawn. He cannot wait to come down Front Street with Princess Jasmine leading the way.