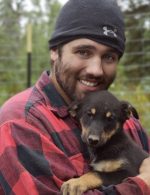 Josh McNeal age 26, was born and raised in a small logging community of Amboy, Washington on the foothills of Mt. St Helens in Southwest Washington. Growing up he was an avid outdoorsman and participated in football, wrestling, track and baseball. He spent his summers working on local farms hauling hay and cutting firewood. When he turned 16, he started spending his summers in Kenai, Alaska working at a fishing lodge on the Kenai River. The day after graduating from La Center High School he moved full time to Alaska. For the next four years he attended the Universisty of Alaska Fairbanks where he graduated in 2017 with a B.S. in Petroleum Engineering. During his tenure in college is where he found his love for mushing. His senior year of college he handled for Ken Anderson as he trained for his final Iditarod. After graduation, Josh moved to Kasilof where he began building his kennel in the spring of 2018. In March of 2020 he packed up everything and moved to Fairbanks. He now resides in the hills of Ester with his wife Jobie McNeal and their 40 Alaskan Huskies. Josh works as a Wellsite Supervisor on the North Slope of Alaska for Hilcorp Alaska. While not running dogs he enjoys fishing, hunting and traveling with his wife. After completing the Iditarod Gold Trail loop last year, he is extremely excited to be running to Nome!