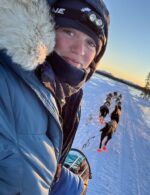 KattiJo (pronounced Katie Jo) Deeter is originally from northwest Wisconsin. She moved to Alaska in 2010 after graduating from UW-La Crosse and working seasonally around the Lower 48 for several years. Her first job in Alaska was working for a dog sledding tour company in Juneau. While there she met her now-husband Jeff Deeter. Falling in love with Jeff, his dogs and the state of Alaska was enough to keep her here. KattiJo says, “Alaska is so big and mushing is so complex, there is always something new to learn, see or do.” But the interest in running the Iditarod was not immediate. KattiJo says, “That seemed like too much. I didn’t know if I would ever have the skills to be able to do that and I didn’t know if I wanted to either.” Eventually though, racing became a natural progression after years of helping Jeff train his Iditarod team.

KattiJo ran her first Iditarod in 2022. She has the unique distinction of being one of the only mushers to ever run all the way to Nome but not be considered an official finisher. She says, “Several of us mushers got trapped in a terrible ground blizzard between White Mountain and Safety. Some wind gusts must have been nearly 80 mph. My sled was getting blown over and somersaulted off the trail, down the side of the mountain. Eventually we had to call for help because we couldn’t make any forward progress, and it was a dangerous situation for us and our dogs. Jeff and I were taken with snowmachine assistance three miles ahead down the trail to the Topkok shelter cabin. At one point there were four of us mushers in that cabin with 32 dogs! We spent roughly 24 hours there, and then Jeff and I were able to mush the rest of the way to Nome. When I was in the storm, and in the cabin, I told myself I was selling all of my dogs and moving to Hawaii!” She laughs. “But of course after I made it to Nome and got some good sleep, I was able to get some perspective, and I started thinking about my next Iditarod.” KattiJo is not considered an official finisher of the 2022 Iditarod because of the snowmachine assistance she received. She is hopeful that 2023 will be different.