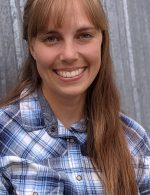 Kailyn Davis 29, was raised in Anchorage, Alaska and moved to Fairbanks in 2010 where she attended the University of Alaska Fairbanks and obtained bachelor’s degrees in Music Education and Geology.

When she was only seven years old her elementary school class followed the Iditarod after being visited by Iditarod musher John Baker. It was then she decided that she was going to run it some day. With that determination she started running dogs at the age of 17 with Christine Roalofs and finished her qualifiers with teams from Roalofs and Al Eischens while attending college. In 2020-21 Kailyn completed her first year as a high school math teacher in the Fairbanks North Star Borough School District before getting an offer to run Iditarod and after many years of working towards her mushing goal and seeing close friends cross the burled arch, it’s her turn to try. This year she is excited and honored to be running dogs from Wade Marrs out of Willow, Alaska.