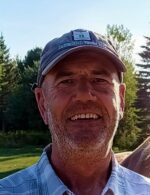 Gerhardt Thiart was born and raised near Cape Town, South Africa. After graduating from high school he joined the military where he obtained the rank of 1st Lieutenant Platoon Commander in the SADF Infantry with several tours under his belt. After military he joined a restaurant group where he met Al-Jo. AJ for short. They got married in 2003. In 2002 they became friends with André and Natalie van der Merwe, reputable and respected Siberian breeders. Gerhardt and AJ fell in love with the breed and got three. Being working dogs, they got the carts, the scooters, harnesses and other stuff and exercised their three Siberians on dirt farm roads under the guidance of André and Natalie. Gerhardt was introduced to the Iditarod through André. Gerhardt ordered his first Iditarod documentary in 2002. It was the beginning of the end. They were hooked. Gerhardt told his wife that he wanted to do the Iditarod “one day”.

Pursuing their Iditarod dream, they packed their bags, jumped the cliff and came to the United States in 2010 where they worked as handlers at a sled dog kennel in Michigan. To add more weight and credibility to their Green Card application, Gerhardt went back to school. Twice. In 2017 he graduated with a degree in Business Management and in 2019 he graduated with a degree in Financial Accounting. AJ graduated as a Veterinary Assistant in 2015.

In 2020 their Green Cards were approved and they moved to Alaska in the fall of 2020. In the winter of 2021 Gerhardt did all three of his qualifiers (Copper Basin 300, Willow 300 and Denali 200) under the guidance and watchful eye of Mitch Seavey, his mentor and coach.

In 2022 a 20-year dream came true. Gerhardt ran Mitch Seavey’s puppy team. Fifty miles from Nome, his race got short winded by hurricane arctic winds and a broken ankle. His words: “I froze my butt off for 12 days and all I needed was six more hours. Right place, wrong time. This is the Iditarod.”

Gerhardt is the Executive Director of GAT FOUNDATION Inc., a non-profit supporting, bringing awareness, promoting, and raising funds for Military Veteran Service Dogs. For more information, please visit his website at www.gatfoundation.org or for any questions and comments, you can contact Gerhardt and Al-Jo at info@gatfoundation.org

For Dogs – With Dogs