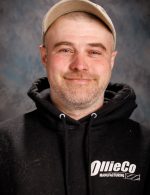 Lev Shvarts, 41, says he was born in a country in the Ukraine in the Soviet Union and is now a proud US citizen. He grew up in the Boston area, got a BS in Electrical Engineering at Carnegie Mellon in Pittsburgh. He went back to work in Massachusetts, but while sitting in an air conditioned office, he decided to leave a perfectly good career in engineering to pursue dog mushing. He moved to Willow, Alaska in 2011. “I am now a self-employed contractor and operate a short-run manufacturing and light fabrication / machine shop. He is married to Melissa. His hobbies include tinkering, tools, and tattoos.