The final Elim 11 musher Kaci Murringer has arrived in Nome! 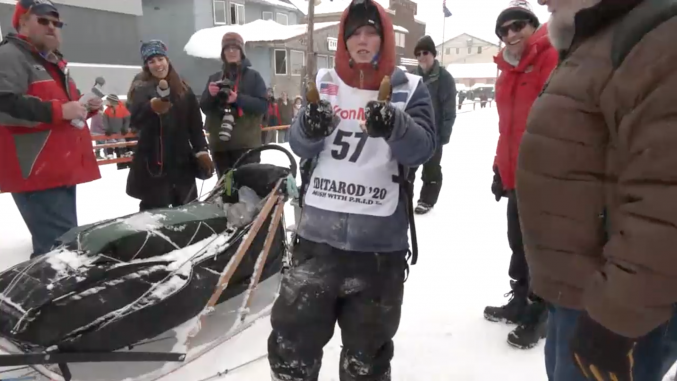 Kaci Murringer arrives in Nome as the final musher of 2020 and receives the Red Lantern award.

Murringer and her race team completed the Iditarod in 13 days, 22 hours, 29 minutes and 45 seconds. Murringer had 10 dogs in harness when she arrived at the finish line underneath the burled arch on Nome’s Front Street.

The Red Lantern Award acts as a symbol of perseverance for the Iditarod. According to historians, awarding the red lantern for the last place finisher has become an Alaska tradition in sled dog racing. The award honors the final team’s dedication to fulfilling their goal of safely and successfully crossing under the burled arch despite unexpected challenges.

In a race field that began with 57 mushers nearly 1,000 miles away in Willow, Murringer was the 34th and final musher that completed Iditarod XLVIII. The award will be presented to Murringer at a later date at the Iditarod awards banquet.