Update from The Iditarod Regarding Continued Search for Leon, Missing Sled Dog

The Iditarod is heartbroken over the disappearance of Leon, a sled dog on the race team of Sebastien Dos Santos Borges and would like to recognize the continued search efforts.

The alert activated two separate snowmachine searches that afternoon;  one headed north in the direction from Cripple to Ruby, which had spotted Leon not far south of Ruby, but that effort was unsuccessful.  Later that day, another snowmachine was deployed from Ruby south on the trail towards Cripple and Leon was spotted. That effort was also unsuccessful as Leon diverted into a wooded stream valley with deep, soft snow, making pursuit on foot or snowmachine almost impossible.

While search efforts continued on Sunday and Monday without success, on Tuesday arrangements were made to fly Leon’s dog handler from Anchorage to Ruby. The Iditarod also provided the dog handler with accommodations at a local B&B and an Iditarod phone to use to ensure efficient communication. On Thursday, March 17, a dog was seen in town matching the description of Leon.  The dog handler decided to set up camp near the wooded stream valley where Leon had gone earlier in the week. On Friday, March 18, after spending the night with no sighting of Leon, Dos Santos Borges’ dog handler flew out of Ruby en route to Nome.

On Saturday, March 19, Sebastian’s team arrived in Nome from the shelter cabin by snowmachine and truck after the musher had scratched due the intense ground storm in the area.

On Sunday, March 20,  Sebastien, his dog handler and a canine teammate, Siku, prepared to fly to Ruby to continue the search for Leon.  The Iditarod provided the flight, a room at the local B&B and an Iditarod phone. It was the Iditarod’s understanding that the search effort would continue until Thursday, March 24.

On Monday, March 21, an organized effort by the Iditarod was made to expand awareness of Leon beyond Galena and McGrath and to include all communities along the trail. This included production of a flier with a photo of Leon, descriptions of his timidness, an advisement to not engage in a chase and the announcement of a $1,000 reward for efforts leading to Leon’s safe return.

On Thursday, March 24, a long-time Iditarod volunteer based in Ruby, reported to the Iditarod that someone saw a possible sighting east of Galena. Based on this information, more volunteers in Galena had been monitoring the area. Dos Santos Borges and his handler had to withdraw from the search effort, but search efforts for Leon have not stopped. As of Sunday, March 27, the Iditarod was assisting others in a plan with musher Nic Petit, who flew via helicopter to Nikolai to follow the trail south to McGrath, then north to Ruby/Galena.

A fundraiser called ‘Operation Find Leon’ has been set up by members of an Iditarod Fan Facebook page to help raise funds for these search measures.  On Sunday, March 27, fundraising for a helicopter search mission was organized by members of the 2022 Iditarod Fan’s to fly Nic Petit and another canine companion via helicopter to Nikolai to follow the trail south to McGrath, then north to Ruby/Galena. The Iditarod cannot express enough gratitude for not only the organizers, but also the individual donors who have helped towards the cause of finding Leon.

At this time, there is a great window of clear weather that could help in the ongoing search for Leon. Dogs may remain reclusive from humans for weeks or months at a time, however, the Iditarod will hold out hope that this window could provide a reasonable likelihood that Leon will be sighted and safely recovered.

While in almost all cases, appropriate dog gear and collars are used to ensure safe and secure connections, a single collective mistake is one too many.  Accordingly,  we are actively working on updating the Standard Operating Procedures to prevent this from happening in the future and instilling a stronger sense of shared responsibility.

The Iditarod will continue to provide updates as they arise, and ask for Iditarod Nation’s assistance with spreading the word to help with the safe return of Leon. 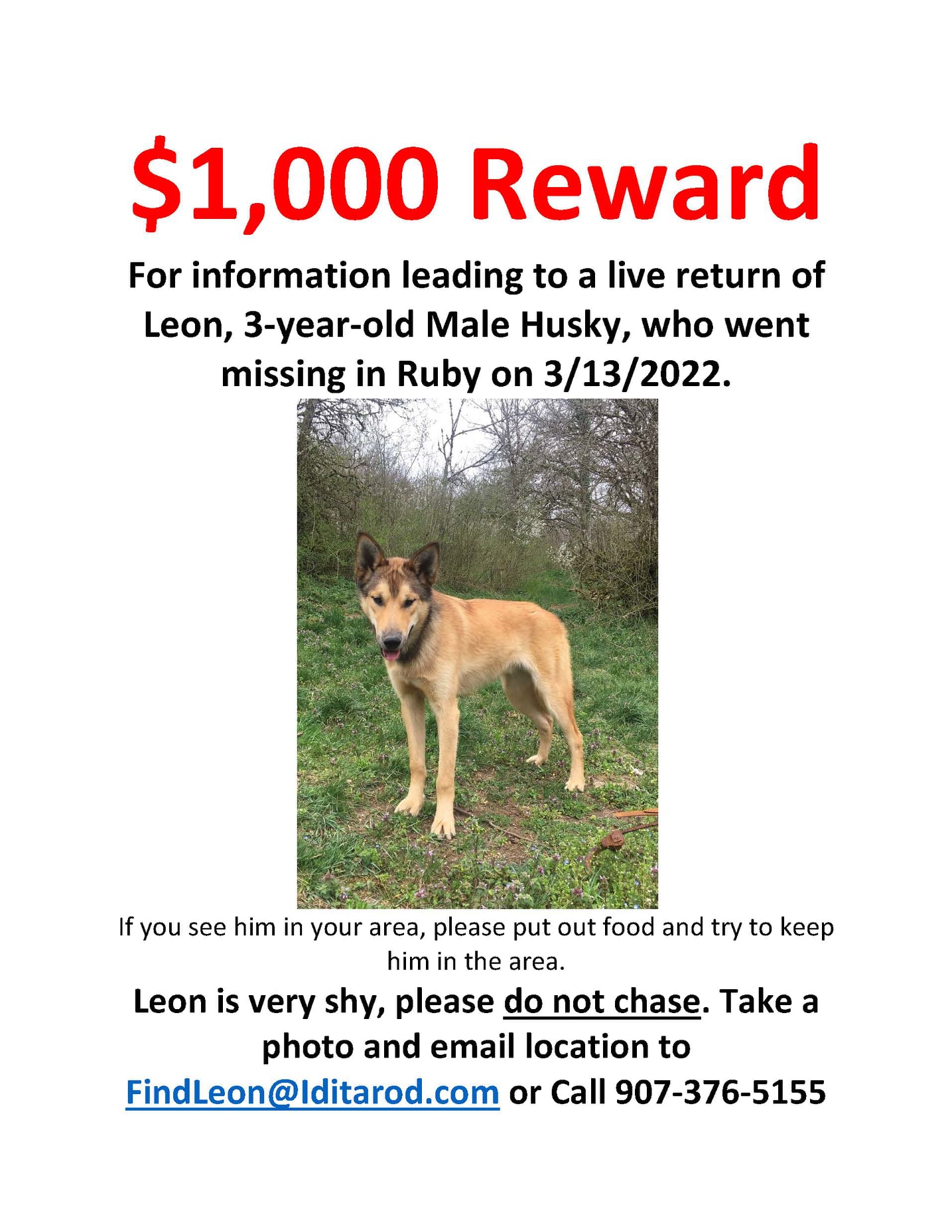